Fall 2011 is the unofficial season of anthropomorphized penguins. Don’t believe me? Between the penguin sweater craze and the release of Happy Feet 2, adorable penguins are everywhere. Now, a third entry into fall’s penguin lineup is here in the form of BulkyPix’s super-cute new game, Crazy Escape [99¢]. And this one answers the question on everybody’s mind: Can penguins drive tiny penguin cars, and if so, is it extra-adorable?

It’s a story as old as time itself: Two penguin buddies have to take to their Jeep (err, low-emission 4×4 of indeterminate branding, I should say) to save their sheep friends from being kidnapped and eaten by wolves. As these penguins race along the winding road, they must collect sheep, stars (ostensibly because penguins like shiny objects?), keys (to unchain locked-up sheep, of course!), and avoid stationary wolves, roaming wolves, chasing wolves – basically wolves of all kinds, all right?! You can run into fences (good) and trees (bad!), and the less road you cover to complete the level, the better. 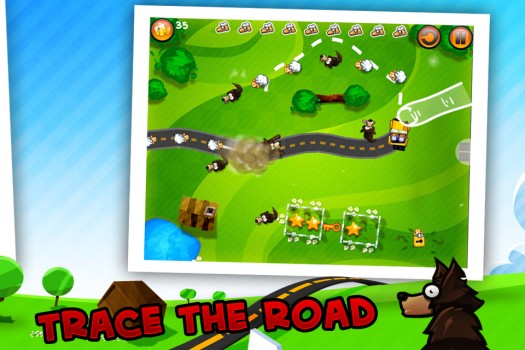 Your finger acts as a simultaneous road-creating device and penguin-steerer. You drag your finger across the screen to create the path your penguins take. Ideally, you devise the shortest route possible to collect your stars and sheep friends, as this results in the highest score.

At first, it’s not particularly challenging because there’s no element of speed involved. However, as the game progresses, wolves start out on the road behind you, following your every movement, and if you dawdle too long you’ll be busted for sure. Additionally, things like oil slicks and trees get in your path which, if hit, cause you to swerve (at best) or force you to restart the level (at worst). Here’s hoping everyone was wearing their seatbelts!

The levels go by lightning-fast, so it’s perfect if you have a short attention span or a short period of time in which to play. The graphics are also pretty cute. However, as it’s a line-drawing game, the most important part is the drawing element. The worst part of so many drawing games is an imprecise, over-sensitive or otherwise less-than-ideal drawing mechanic.

Luckily, that’s not the case with Crazy Escape. The drawing was perfectly in-sync with my finger; at times, perhaps a little too in-sync, as I have shaky hands (particularly when being chased by hungry wolves). My only real complaint is that on an iPhone or iPod touch screen, it’s hard to see what you’re doing. My chubby fingers kept blocking my view, which made it difficult to navigate around the increasingly challenging obstacles the game threw at me as I progressed.

Still, despite my fat fingers, I found this game to be extremely fun. For only a buck, there’s really no excuse to not download this one. You get a seemingly-endless number of levels and a fun diversion, and it’s Universal to boot. Besides, you don’t want to find yourself ill-prepared for the fall penguin craze, do you?