Back in March, we published a quick preview of the rope-based puzzle game, “Rope Racket" after seeing it demonstrated at GDC and we promised to keep to you posted. Well, it’s a few months later than expected, but it’s finally been released under the new name: Rope Rescue [99¢/HD] , developed by Untame and published by Chillingo.

In this game, you control a colorful parrot, who must drag a length of rope around the screen, to free a baby parrot stuck inside a cage. But there’s a catch. Before you can pull the cage door open, the rope must wrap around (or at least touch) every wheel on the level. You only have a certain amount of rope available, so the challenge is to identify the most efficient route to wrap your rope around the various gears with your finger.

The screen displays the amount of rope remaining and confirms how much rope you can use to score 1 – 3 feathers. Your score for each level is based on the time taken to free the bird and the amount of unused rope. If there’s a better solution available, you probably won’t be awarded the full three feathers. Scores are tracked using Chillingo’s Crystal and Game Center, with a separate leaderboards for each chapter, plus 17 achievements. 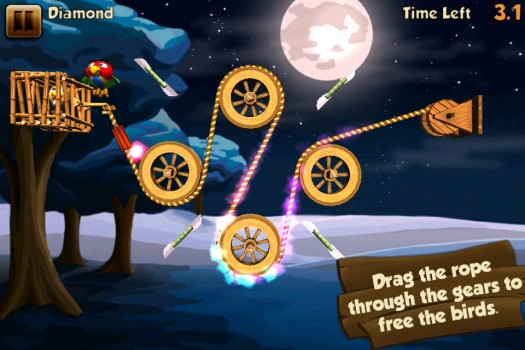 There are a few obstacles to overcome along the way. Some of the wheels are moving, so you need to rope them when they’re in a suitable position. Additionally, there are sharp flying knives which sever the rope, fire-cannons which shoot rope-burning fireballs, and evil vampire bats which chase you relentlessly around the screen (but are scared of the rope).

The first couple of worlds are full of variation and surprises as new elements are introduced, but then throughout the rest of the game the same components are re-used over and over. Fortunately the puzzle designs are good enough to keep things interesting and challenging. These puzzles will definitely get your brain working. I frequently scored one or two feathers on a level and then experimented with different approaches to earn the final feather by using less rope to free the bird. 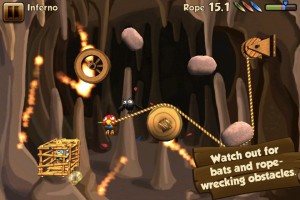 There’s five chapters in Rope Rescue, each with 12 levels. Beating a level unlocks the next level or chapter. Alternatively, you can use a feather to unlock ANY level. This is rather unusual as you can scroll straight to the final world and unlock the final level! This direct access to the later levels does remove some of the satisfaction of trying to reach that point yourself.

Some levels feature an “Amber" which contains a butterfly. Apparently an amber is “a pale yellow, sometimes reddish or brownish, fossil resin of vegetable origin“. Who knew? Anyway, you can smash the amber with your rope to release a butterfly and score a bonus.  This doesn’t have to be done as part of your rope’s route through the level, you just smash the amber with the rope and then play the level afterwards. The butterflies you earn can be used to unlock levels or to see the solution for a level. Special bonus butterflies are also awarded with every 25 feathers collected, or via in-app purchases.

One aspect of the game felt a little creepy. If the flying knifes stab your parrot it shrieks, loudly. And when the rope burns, the flames travel like a fuse, straight back to your bird. It’s an interesting effect, but again the bird yelps, which is unpleasant and loud. I’ve played plenty of games where creatures die, without even blinking, but  the way the knives are depicted sticking blade-first out of a rock, combined with the bird shrieking upon being stabbed, felt a little wrong for a casual puzzle game about saving little baby birds.

Other features include a bird sanctuary, for viewing the parrots you’ve rescued as they fly around, chirping happily about their freedom. And online challenges can be made with friends or random online players, via Crystal, to see who can score the best result on a particular level. These challenges are asynchronous, so you don’t have to be online at the same time as the person being challenged. You start off with 1000 challenge points and there’s a ranking specially for challenge scores.

Rope Rescue provides a decent challenge and caters for different skill levels. The best players will aim for three feather per level, while more casual players can just aim to complete levels. The other puzzle is trying to decide which version to download if you have an iPhone or iPod, since the Universal HD and non-HD versions are currently exactly the same low price. Answer: Get the HD version, unless you have limited storage space.