Dark Incursion [$1.99] had all the makings of a decent ‘Metroidvania’ title for iOS. Everything from its classically-inspired pixel graphics and music to even its overarching story created a compelling atmosphere for playing. Most importantly, Dark Incursion also did a good job of somewhat emulating the Metroidvania style of gameplay while attempting to improve upon it with its different take on equipment upgrades. However, despite all these positives, Dark Incursion’s horrendous control scheme simply ruins almost all of the fun.

Dark Incursion is a 2D side scrolling adventure game with a touch of platforming mixed into the gameplay. You play as Anya, an underground resistance fighter attempting to infiltrate a secret military laboratory. The game plays exactly like the recent 2D iterations of Castlevania or Metroid. Dark Incursion even preserves the standard ‘find power-up, backtrack to previously inaccessible area’ sort of gameplay (hence the term Metroidvania). Dark Incursion’s similarities don’t end with gameplay, as even the graphics and music are very similar to those spiritual predecessors. Even though Dark Incursion isn’t particularly original when it comes to its presentation, it still does a good job integrating a visual style that has proven to be popular in similar games. 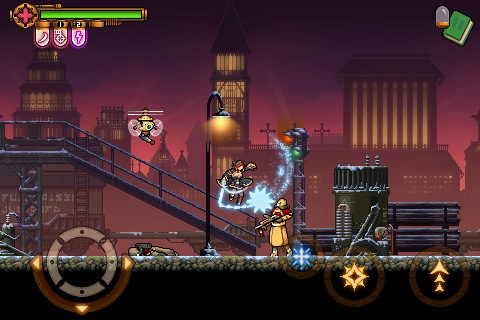 Dark Incursion deviates somewhat from the traditional formula in its ‘fuse’ system. Anya has four different fuse slots, which can be filled with a variety of enhancement fuses that range from increasing your defense, to making you move faster, to adding elemental powers to your attacks. The elemental fuses are especially important because they also have secondary powers that are necessary to advance beyond certain sections (for example, the electric fuse can jump start elevators, allowing you to actually use them).

The interesting twist is that each fuse (with the exception of some basic ones) has a finite amount of uses. Also, when a fuse is depleted, it disappears. This goes for even the all-important elemental fuses, which means that poor fuse management can get you to a point where you cannot advance further because you don’t have the proper elemental fuse. Granted, fuses are dropped randomly from baddies, and since enemies continually respawn, you aren’t ever permanently locked out. Still, it’s an interesting choice but has the potential for some frustrating outcomes.

Whatever success Dark Incursion has quickly crumbles when it comes to its controls. Simply put, the controls are inaccurate, cumbersome, and are just not implemented well. Dark Incursion employs a virtual joystick, but the entire joystick moves with your finger. That means that, visually, the joystick always looks like it’s in the neutral position, even when it isn’t. In addition, simple actions like moving while in the air after a jump or even ducking to avoid a shot just aren’t reliable.

Also there were some occasions where I’d encounter a certain amount of lag between pushing a button and Anya actually performing the action. However, the jumping movement issues are by far my biggest issue, as you’re going to need to do a lot of jumping not just for the platform portions of the game, but also simply to avoid the potshots being taken at you throughout the game. Also, when you consider the limited checkpoint system, as well as the finite fuse resources, the control issues in Dark Incursion simply become inexcusable.

It really is a shame about the controls, because otherwise Dark Incursion would be a game worth checking out simply for its somewhat successful implementation of the Metroidvania formula on iOS. However, in its current state you would be far more likely to simply be frustrated with the game than actually enjoy any aspect of it. According to folks in our forums, a controls fix is supposedly in the works. Assuming that prospective update does improve the situation, Dark Incursion would easily be a game worth trying. However, in its current state, you’re better off passing.