Like most, I think of myself as a reasonably intelligent person. I’m no genius, but I’d like to believe I’ve got a few brain cells to rub together. SpaceChem Mobile [$5.99], a puzzle game that’s just made its way from PC to iPad, shakes my confidence about my own intelligence — and then it leaves me feeling brilliant, just moments later.

Zachtronics Industries’ puzzler hit the PC indie scene earlier this year, wowing critics and players alike. I tell you this to keep you reading, because the other shoe is about to drop: this is a game about chemical synthesis. And it’s not some sort of dolled up, sexy chemical synthesis. This game puts players to work creating chemical products from their raw elements in the simplest terms possible. You’ll be bonding one chemical symbol to another, creating workflows out of color coded paths to move them along. And you’ll (probably) love it.

I say “probably," because SpaceChem isn’t for everyone. You’ll need a heavy dose of curiosity and creativity, plenty of patience and just a dash of masochism. But if you’re still reading this review after seeing the screenshots and learning what it’s about, I’m pretty sure you’ll love this game. 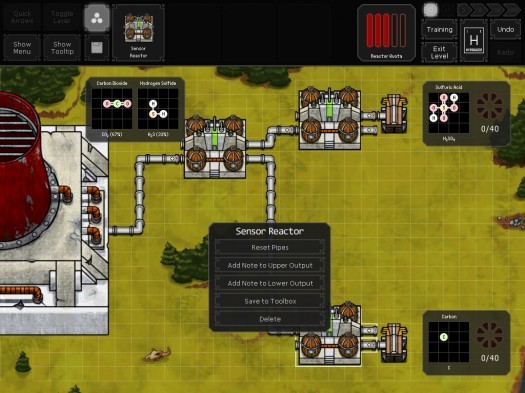 As mentioned, SpaceChem is all about chemical synthesis. You’re responsible for turning elements and compounds into the required chemical products, and then mass producing them. At the game’s most basic, a level requires you to bring in two elements, bond them together and output the correct compound. To facilitate this process, you have a pair of red and blue waldos, remote manipulators that will follow the paths you lay down and the commands you place in that path. You create the program, and they’ll follow through, red on red, blue on blue.

From that simple input/output beginning you’ll learn to break and create bonds, combine and discard the fruits of multiple reactors and set up conditional commands. The outputs get more and more complicated, but the game largely lets you muddle your way through unassisted. Aside from introducing you to each new command with a tutorial screen, you’ll be left on your own to work through each level. This left me hitting my head on any number of walls while I worked my way through, but there are few feelings as good as finally solving a tricky level and watching your quota fill up. 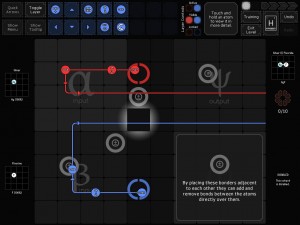 Each time you get that thrill, though, there’s another level waiting to defeat you. There over 40 levels to work through in the main campaign, and most leave you longing for the comfort of your last completed level. Once you’re through those, there are well over 100 more puzzles available in ResearchNet with more to come. These are community created and carefully curated, and yes, you can contribute your own assignments as well.

One of the coolest things about SpaceChem is that each level has a near-endless number of potential solutions. Each solution you come up with is ranked against the community, so you’ll know if you could have done better, with fewer cycles spent or symbols used. Then you can go back and increase your efficiency. If you’re so inclined, you can also see what players from the desktop version have done by visiting SolutionNet. It’s cheating, a bit, but it’s also extremely educational to learn how efficiently other people are pulling these things off.

Playing SpaceChem feels like learning a new skill. It’s a slow education, but you can build on what you learn until you no longer feel like you need to start each challenge from scratch. The light-bulb moments are frequent and motivating. This game should feel like work, but it’s insanely fun.

Unfortunately, the iPad version is missing a little bit of the desktop version: namely, the story and boss battles. The boss battles didn’t work with the iPad’s setup, and the story had to be chucked without them. So if you can’t bear to go without, you might want to consider making your purchase on desktop. But everything else about this port is top notch. After an early patch the interface works beautifully on the touch screen. The music is fantastic, and, for what it’s worth, the game looks as good as it could on any desktop monitor.

SpaceChem is an easy purchase to recommend. It’s not as if I can tell you to buy it if you’re into puzzle games about creating workflows for chemical synthesis — you’re looking at a rare breed. If any part of you thinks you might be interested in such a thing, then congratulations, you’re the target market. Play SpaceChem. If you don’t, you’re depriving yourself of one of the smartest, coolest puzzle games around. Why would you want to go and do a thing like that?