Backflip Studios’ Boss Battles [Free / HD] is difficult to really talk about in a lengthy matter. After all, you know exactly what the game is based on its title alone and the fact it’s free should ensure nobody will hesitate over it too much. Still, the concept alone is interesting enough to warrant a discussion.

The idea of basing a game on boss fights has been done before, Shadow of the Colossus, for instance, and Cave’s Japanese only Kesui Death Label, but Backflip’s pedigree of casual titles mixes the idea up a little by creating an easier to push through barrier of entry.

Boss Battles is a vertical, bullet-hell shoot-em-up, where you control a ship blasting through space by simply moving your finger across the screen. The game is packed with eight boss battles, each with five different levels of difficulty that reward you with gems based on which level of difficulty you choose to play. 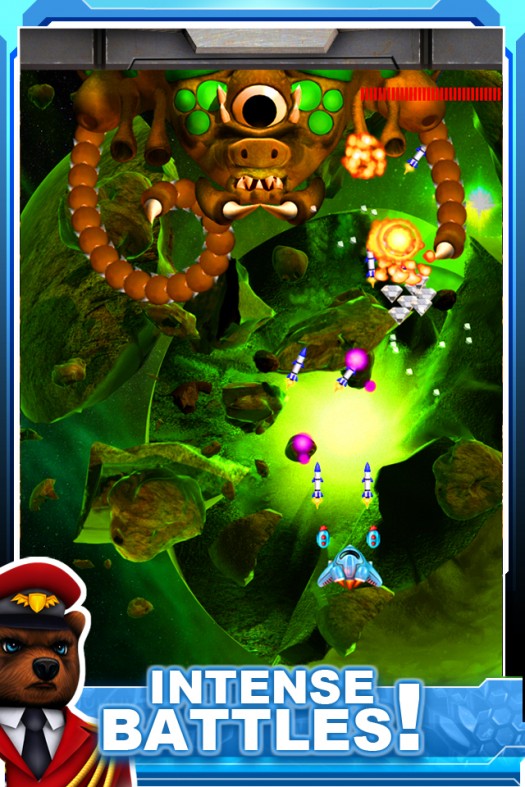 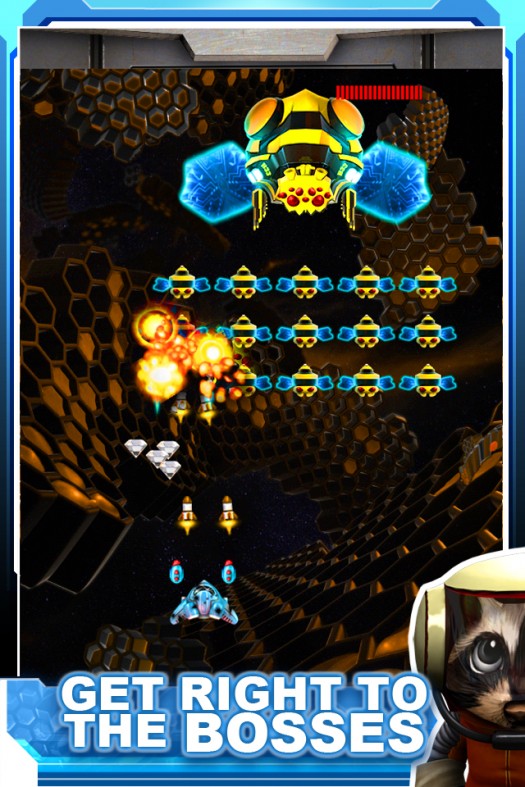 Those gems unlock different power-ups and weapon enhancements, as well as extra lives. The freemium model is employed for those who don’t want to grind through the game to get new weapons, but if you’ve got even just a smidgen of patience, you’ll never need to use the in-app purchases.

Technically, Boss Battles is slightly more than just a series of bosses, as each stage starts with a simple, but necessary farming run where you shoot humble enemies as they drop from the top of the screen to get more gems. While the bosses are certainly the highlight and beating them will collect the most gems, farming in the stages early portions will ensure you’ll be able to save up for whatever weapon enhancement you’ve got your eyes on.

As for the bosses, they’re visually ridiculous and over-the-top. They’re not particularly difficult after the first round provided you’ve outfitted your ship with the right weapons, and they don’t do much to scale the difficulty other than shoot out more projectiles or move a little quicker. Most can be beaten by simply hammering bullets into them and don’t require the usual puzzling and tiered elements we’re all used to in vertical shooters. Still, the right weapon will make short work of an enemy, so it’s possible the studio wanted to stress that more than ripping brightly colored pieces off a boss.

Unfortunately, the free part isn’t entirely supported by IAP’s, there is also a banner ad on the top of the play screen. Some games can handle this fine, but in a vertical shooter, it cuts down a bit too much on screen real estate and when the ad changes mid-game, it’s a distraction from the dodging and shooting you should be doing. It would be nice to be able to buy out of the ads, but no option exists at the moment. It’s also a little odd the app isn’t universal, but that might have something to do with a complexity of in-app purchase transfers. As you’d expect, the HD iPad version looks significantly better, but it also means the ads are bigger.

If it’s even feasible to create a casual shoot-em-up, Backflip has certainly come close. At the moment, it still feels more like a proof of concept than a full-fledged experience, but as a quick and free distraction it works well. It doesn’t have anywhere near the visual flair of a Cave shooter, but the core idea is entertaining enough. If a little more love had been poured into the complexity of the battles as they evolve over difficulty tiers, it would have been a more thorough experience.