When it comes to the crowded Tower Defense genre, a game truly needs to take an innovative (or extremely well-produced) approach in order to make its mark. Unfortunately, Tiny Defense [$0.99] doesn’t really satisfy this lofty goal. Sure, Tiny Defense manages to take the core gameplay of Plants vs Zombies and offer a twist on the traditional formula (as well as a vastly different setting), but it just doesn’t offer any sort of gameplay  experience that can’t be found in better games in the genre.

As mentioned above, Tiny Defense closely mimics tower defense gameplay made popular by Plants vs Zombies – gamers place various attacking and support units on the right side of the screen in order to defend against baddies coming in from the left. If any enemies get to the other side, you lose a life. Lose enough lives, and the game is over. Tiny Defense differs somewhat in its theme and perspective. Instead of plants, you control a variety of robotic units that are defended against evil (and usually much bigger) robots. Also, instead of the gameplay arena taking place from a top-down perspective, Tiny Defense has a purely 2D perspective. 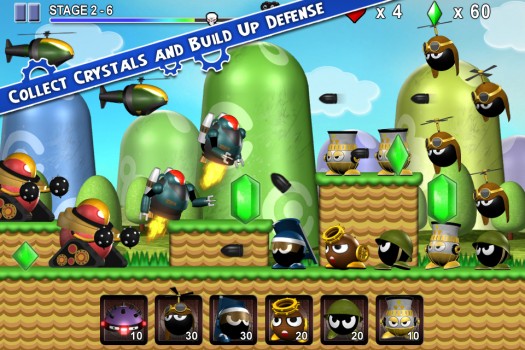 This change in perspective means that Tiny Defense features a bit more specialized units than other Tower Defense games, as you now have to deal with air units as well as ground units. It’s not a particularly big change to the gameplay, but having to ensure proper unit compatibility for both ground and air does require a bit more strategy than normally expected. In addition, I appreciate the inclusion of both air units that attack ground targets and vice versa, as the extra variety certainly increases the amount of variety in terms of strategic placement (and selection) of units. This extra twist is certainly one of the high points for Tiny Defense.

Another thing Tiny Defense does well is its availability of content. There are a ton of robots to unlock, as well as a large amount of stages and mini-games to play through. It’s also all available up-front without any annoying IAP. One complaint I had was with the general length of each stage – I just thought they were too short. Overall, however, Tiny Defense should not disappoint as far as getting your money’s worth is concerned.

Unfortunately, Tiny Defense doesn’t offer much else in the way of innovative or even particularly well-done gameplay. Even with the changes mentioned above, you will definitely get a Plants vs Zombies vibe from the moment you place your first crystal-producing (think: Sunflower) support robot. Everything from the robot selection screen at the start of each stage to the mini-games to even the in-game “store” that has you buying new units and various power-ups just feels rehashed.

Even more disappointing, the parts of Tiny Defense that don’t give you that sensation of déjà vu just seem to lack any personality. I just couldn’t bring myself to care about the story, much less about my individual units. Being able to create that sort of personal attachment goes a long way towards enjoying a game such as this, and I just wasn’t feeling it from Tiny Defense.

It may seem unfair to compare Tiny Defense to one of the ‘giants’ of the Tower Defense genre, but when your game elicits the same sort of general gameplay feel, it can’t be helped. Simply put, Tiny Defense is an average tower defense game with small twists on the gameplay that don’t particularly propel it above mediocrity.  If you’re a fan of games like Plants vs Zombies and you’re looking to try anything with a remotely similar gameplay experience, then Tiny Defense will certainly satisfy that urge. However, if you’re looking for the next hit Tower Defense game, you won’t find it here.