Just a smidge over a year ago, Epic announced that the Unreal Engine would be hitting iOS. We’ve seen a great game or two developed in the UDK since (Infinity Blade [$5.99] being the obvious example), but most studios outside of Epic seem to still be feeling the engine out. Those cautious, early days might finally be coming to an end, thanks in part to Gyro13 [$5.99].

This game is sexy, pulling out most of the bells and whistles we’ve come to expect from the Unreal Engine. Textures, lighting and shadows are all top notch. But we’ve seen that before, and slick visuals don’t make the game. Luckily, Gyro13 follows through with outstanding gameplay, an original soundtrack and even a hint of a story. 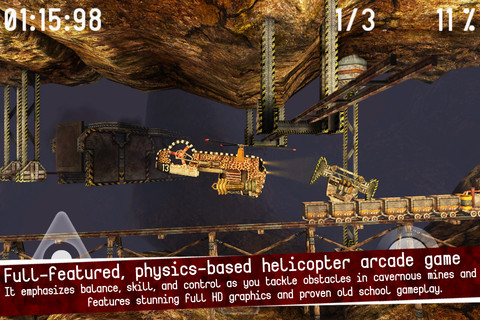 You play a pilot of a gyrocopter, tasked with rescuing people in a mine that’s filling with deadly gas. In each of the game’s 24 levels you’re told how many miners there are to save and how long you have to save them before the gas overtakes you. You can survive it, but your cargo hold is unprotected and your passengers will die.

Speed is of the essence, but so is safety. Your ship is fragile, so a few slight bumps against the wall will blow you apart. Thanks to a complicated set of controls, avoiding the walls and obstacles can be a serious challenge. Your ship moves on a central axis, controlled by an on-screen slider. Slide to the right to tip your nose down and left to raise it up. That covers the steering, and a separate button controls thrust. You can also tap the screen to pulse certain obstacles in front of your ship. It’s complicated, but that difficulty is fundamental to the game’s success. It takes quite a while to get the hang of it, but practice enough and it’ll click. When it does, Gyro13 comes together beautifully. 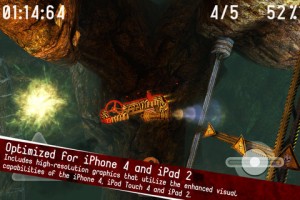 Rescuing the trapped miners takes skill. The mines they’re trapped in are filled with all kinds of old equipment, explosives, wind tunnels and poisonous gas clouds. And those are just the early obstacles. The time limit is generous in most levels, but only if you can get through cleanly. Crash your ship and you’ll be sent back to the last checkpoint, but with 5 more seconds on your total time. As time gets tighter and tighter, landing on those platforms to pick up the miners becomes an exercise in cost/benefit analysis. Is it worth it to save the miner who’s so badly injured he can only crawl slowly to the ship? It might cost the lives of the other eight miners in your hold, and you might not save him either. Could you make the hard call?

It’s an elegant experience, one made even better by the accompanying soundtrack. Tense techno beats increase the anxiety of the last moments of breathable air slipping away. A few other bits and pieces help Gyro13 stand out, including unlockable skins for your ship. Each level’s introduction is voiced, too — and while the voice acting isn’t top of the line, I’ve certainly heard (much) worse.

Gyro13 isn’t the most ambitious title we’ve seen built on UDK, but it is one of the best so far. I only have one major complaint: you can’t see how much time you have left in a level, so if you’ve forgotten your time limit some of the hard choices become moot. Otherwise there’s little left out — even the currently-absent Game Center support is planned for the first update.

Still, this is a challenging title, and it’s one that requires players to commit to an unusual control scheme. I grew to love those controls, but if you’re worried they’re not your style you can always get a few more opinions in our discussion thread. For the daring, though, there are miners to be rescued, and it looks like you’re the only one who can do the job.