There’s a grotesquely misshapen tiger that haunts my dreams. His butt is where his head should be. He implores me to make him whole again, but the more I try to help the more horrific he becomes. I move his parts around in a fevered panic to no avail, unwillingly transforming him from proud feline predator into a twisted terror that would give even H.P. Lovecraft pause.

He is the tiger that was on the plastic sliding puzzle I had when I was 5 years old. When I finally did get that poor beast into his god-given form again, it was as if I had exorcised a demon. It felt like the laying on of hands. Much more pleasant and significantly less nightmarish was my recent experience with MixZle [$.99]. No pictures, no waylaid arses, just a simple but challenging physics puzzler with a sliding panel mechanic. 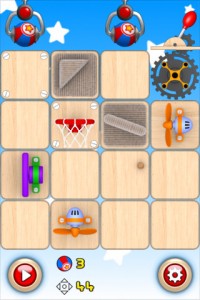 The game is a series of challenges (ala Angry Birds or Cut the Rope) where you must drop a ball from the top of the screen and ensure that it goes through a hoop elsewhere on the screen. Drop too many without getting one through and you must restart the level. It’s as stripped down a conceit as you’re likely to find.

Don’t let that throw you off, however. There’s plenty of depth and variety here, due to the aforementioned sliding puzzle mechanic. Every level is a series of panels with one square missing. The others will either be blank or contain structures that you can position to divert the course of the ball towards the net. Early levels will be a breeze, as the correct positions for most tiles are quickly apparent.

The challenge steadily ramps as new structures come into play, which ensures that MixZle is fresh throughout. Rudimentary planks and ramps give way to fans, pneumatic launchers, and more. Additional difficulty is slowly mixed in, in the form of fixed tiles that you must work around, cranks which can rotate tiles, and other constraints. Also, not every tile with a structure on it will be necessary to solving some puzzles; it’s a clever twist that keeps your mind working.

The developer clearly has a mind and a passion for puzzle design. The game has over 100 levels, so value-per-dollar hounds will find no complaints in the content category here. A score is assigned based on the number of ball drops and tile movements it takes to complete each level, meaning perfectionists will find lots of replayability looking for that optimal solution. 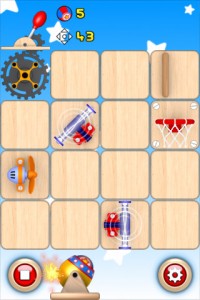 On the minus side, the need to restart a level after x number of drops kills the will to be creative with your problem-solving. There’s already a point system that will tell me if I made a mess of things or took an embarrassing number of moves, so having the panels reset to their beginning positions is an unnecessary fail state. Not to mention I had some cool moments of emergent gameplay where I had fun setting up panels and just playing with the physics, and it always seemed that the level would reset right when I had the board the way I wanted it.

Lack of character is this game’s biggest drawback. It’s a smart game, but it doesn’t seem to really have a sense of play to it. The art is clean and the music is chilled out and conducive to puzzling; there’s just nothing in the presentation to get very excited about. With such well done level design, it’s a shame to have the vanilla assets and sounds turn me off to extended play. In short bursts, however, the game shines as a bite-sized brain teaser.

There’s much to like about MixZle, and at a buck for a heaping biggie-sized helping of levels, the value proposition cannot be denied. It’s not going to set the world on fire, but it’s a smartly executed twist on a well-worn genre. Pick it up, and you’ll find yourself stashing it in the corner of your screen and snacking on it periodically, like trail mix on a road trip. It’s a great palette cleanser between games, and if you’re like me, you may find yourself redeeming some of the dark shames of your childhood ineptitude.