If I have one single gaming kryptonite, it’s the endless runner. Since Canabalt, I have put my mitts on nearly every single one on every device I can in every type and iteration on the same theme, from Robot Unicorn Attack to Jetpack Joyride. Put one of these in my hands, and I will not leave the house, eat or accomplish anything productive. Be-Rad Entertainment’s Serious Sam: Kamikaze Attack! [99¢] takes the idea of the endless runner, then packages it with a series of smaller levels.

While most people are probably hoping for a more true-to-form Serious Sam experience on iOS, you’ll instead be taking on the role of one of the Headless Kamikaze’s here, chasing after Sam in hopes of taking him out with your exploding hands. The game comes as part of the Serious Sam indie series, which tasks independent developers with taking on their own version of the universe, Mommy Games and Vlambeer have already taken their shot and now its Be-Rad’s turn. 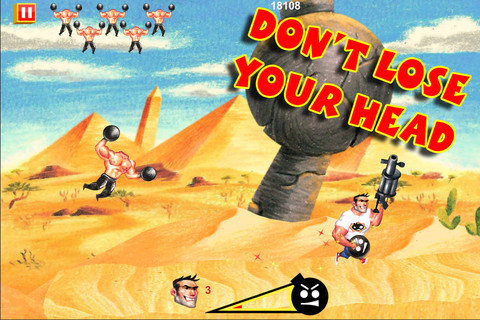 As is the case with most running games, to finish a level you’ll have to avoid bouncing bombs, flying missiles, and oddly placed shrubbery on your journey. To do so, you’ll get a nice little double-jump and a hefty kick, but don’t kick too much, because it’ll add to your rage meter causing you to explode prematurely. It’s a good thing you get several lives to complete your attack on Sam.

It’s a bit similar to Be-Rad’s other runner game, Lame Castle, but with a thick coating of Serious Sam — which basically just means it’s considerably more violent. Like most running games, your goal is to run to the right, tapping the left side of the screen makes you jump and tapping the right side makes you kick. You’ll have around 40 objective based missions that are nice and short, and after the first couple missions you’ll unlock an endless mode and eventually a frog kicking mode (which incidentally, is exactly what it sounds like). 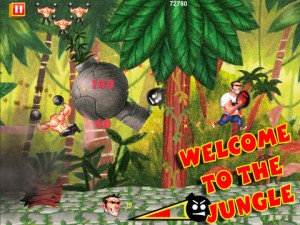 The controls are far looser than most runner games and offer you a much higher chance to correct your mistakes. The double-jump helps a lot, as does the kick — it’s not just about avoiding obstacles, it’s also about destroying them. It’s helpful in a lot of ways, and the looser nature of the whole thing makes it a far more relaxing runner than most.

Each of the standalone missions comes with secondary objectives as well. These tend to be one of just a few different types with a different numerical goal attached. For instance, you’ll need to kick thirty frogs in one level, or kick sixty rockets in another. These are points modifiers, which help up your overall score on the leaderboards. When you complete the bonus goals and certain levels, you’ll also unlock permanent boosts like the number of lives you get or how quickly your rage meter grows.

What’s going to immediately catch you is the visuals, which have a hand-drawn look to them and seem like they were created entirely with a colored pencils and a scissors. It works to great effect, even though the environments or obstacle types don’t really change much throughout the experience. 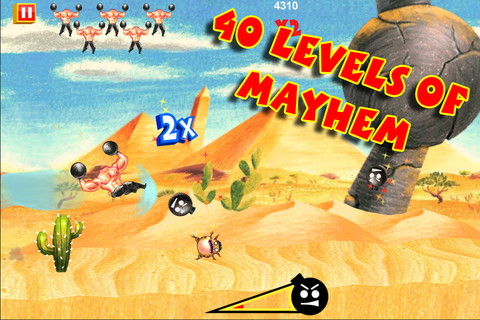 Which is the biggest problem with Serious Sam: Kamikaze Attack! You can’t really criticize a runner game for lack of variety, but since this one comes packed with smaller, mission based sections, it does feel like they could have done more to diversify the experience. The endless mode doesn’t really need much, it’s a fine endless runner, but since the objective based stuff feels like a great opportunity to really change up the experience, it’s too bad it didn’t happen.

You’ll get the occasional ribbing and off-the-wall humor of the Serious Sam series in the form of sound effects and the incidental visual cue, and as a weird standalone package, Kamikaze Attack works well. Running around without a head and with bombs for hands is far more fun than you’d think, and even if the game doesn’t ramp up the challenge as much as most of its ilk, the total quirk and oddness of it all should make for an enjoyable experience for most.