Monsters Ate My Condo [99c] is a super-crazy vertical match-3 game, from Adult Swim and New Zealand developers PikPok, which features intentionally high-energy, cheesy, over-the-top Japanese-style graphics, music and sound effects…and obviously, monsters. There’s basically three things to do:  Keep the monsters happy, score points and try to stop your condominium from toppling over. If you can do this, you’ll score (quite literally) billions of points.

Four colored monsters are hanging around your residential high-rise. There’s a blue unicorn called ‘Reginald Starfire’ who wears a leotard, a red crab with a boat on it’s head,  a green Japanese business-man with one eye and a yellow chihuahua called Lord Ferocious with it’s brain hard-wired into a robot-body. 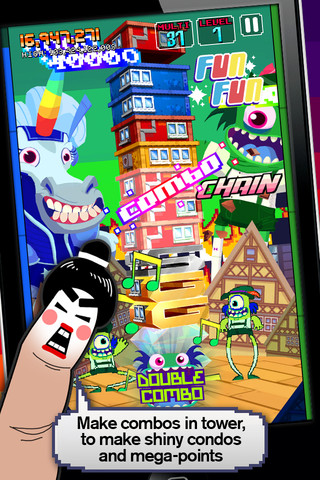 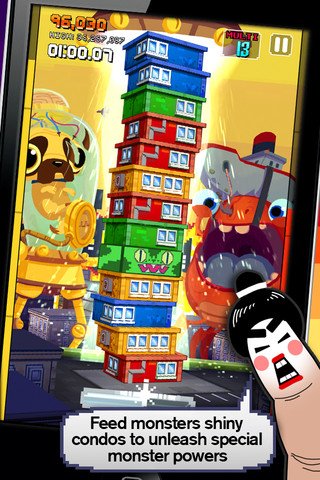 There’s always two monsters present, one standing on each side of your tower. You need to keep these monsters happy because when a monster’s happiness meter gets low, its mood becomes increasingly agitated, until it eventually attacks your tower.

To keep the monsters happy, you can feed them a floor from your tower, by swiping it in their direction. For example, swiping a blue floor over to the blue monster, will help cheer him up. Whereas, swiping a mis-matched floor color onto a monster will make it less happy. As you swipe floors out of your building, new floors drop down from above. The only controls in this game are swiping floors left or right.

Keeping the monsters happy protects your building, but you still need to score points. By swiping certain floors out of your building, you can position three (or more) floors of the same color together, to earn a combo. The combos are evolutionary. First you place three floors of the same color together to  create a bronze floor. Once you have three bronzes together, they become a silver. Three silvers make a gold and three golds make a diamond. So you’re always working your way towards the diamonds. 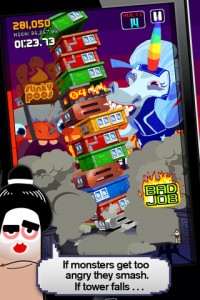 If you get three diamonds in a row… well, I haven’t achieved that yet, but apparently your screen and score go crazy. Each combo earns you points, straightens the tower a little, and if your combo color matches a monster on the screen, that monster will be swapped out with a different colored monster.

Each monster has a special super-power, which is triggered by feeding them a “Shiny condo" (ie: a Bronze, Silver, Gold or Diamond floor). For example, the blue unicorn has the super-power ‘Solid Tower’, which straightens your tower with a rainbow and ensures it won’t topple while the super power is active.  The duration of each super-power depends whether you swiped a bronze, silver, gold or diamond onto the monster.

Concrete floors and bomb floors occasionally drop into your tower, but these can’t be swiped out (unless the unicorns power is activated). They need a combo formed beside or around them to be removed.  If you take too long to defuse a bomb, it counts down to detonation, which can destroy your tower, or leave it leaning precariously like the Tower of Pisa. But, if you match three annoying bombs / concrete floors together, it’s actually helpful, as all of your shiny condos will upgrade.

As your tower gets more levels, it can become unstable. This forces you to be careful about which floors you swipe out, least you cause a collapse, ending your game. When your tower gets wonky, the trick is to complete a combo, or use the unicorns super-power, to straighten things out.

There’s two game modes: Endless and Time-Attack, which are both based on the same game-play, with the later having a 2-minute time limit. This game is universal so will run on iPad, iPhone and Ipod.  OpenFeint and Game Center leader-boards are provided, plus there’s in-game achievements / missions, but these are listed inconveniently on the game-over screen only. The first release has a bug with the leader-boards, but the developers are releasing a fix.

Monsters Ate my Condo is a casual, but clever game, because it gives you conflicting goals. For example, if you swipe floors away to form a combo, you often make the monsters less happy which puts your tower at risk. When you feed floors to the monsters to keep them happy, you’re often throwing away combo scoring opportunities. And when you activate a monsters super-power, you’re using up a shiny condo which could have been used to get a diamond. So you have to constantly choose which goal to focus on, to keep your condo upright and score millions and millions of points.