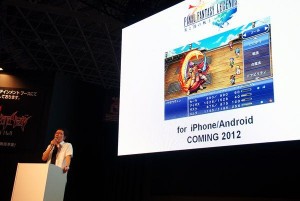 Hey, cool! Square Enix is preparing an iOS and an Android port of Final Fantasy Legends: Hikari to Yami no Senshi for release in 2012. From all accounts, Legends is a very traditional RPG in the Final Fantasy vein, but it’s also a special one since it’s episodic. Legends first graced Japanese mobile phones back in 2010 as an exclusive, similar to how Final Fantasy IV: The After Years was treated before it was re-released on Nintendo’s WiiWare and then later re-combined as a compilation on the PSP.

So, what do we know about this particular version? Not much as usual, and that’s the running problem with TGS coverage in general — this stuff is coming out fast and dirty and we don’t have any native Japanese speakers on staff (we’ll update this story if we discover anything is funny). We do, however, have these two images from the Square Enix event where the port was announced. It looks pretty! 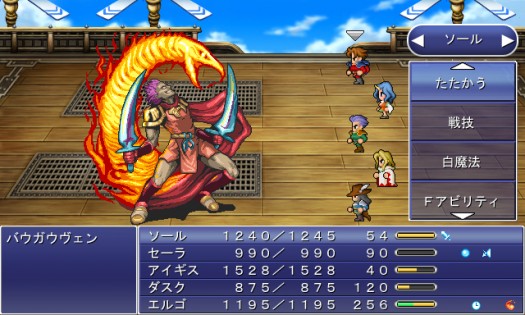 Anywho, for you FF freaks out there, rest assured that this particular title borrows a lot from its elders — Active Time Battle, the ever-popular Job System, and all the usual tropes are in this thing. In English, Legend’s subtitle translates to something like “Warriors of Light and Darkness,” which should give you an indication of what to expect from its story: two small group of youths from the light and dark-side respectively come together to fight and save the world.

As soon as we get more information we’ll update this story.