Hipsta Chez [$0.99] isn’t chess. The game goes out of its way in its name, art and description to make that extremely clear. But for those of us whose chess expertise begins and ends at “look ma, I know how the knight moves," it’s just right. Another color-matching game in a crowded marketplace, it sets itself apart with smart mechanics, a slick interface and achievements that are downright motivational.

I could do without the hipster, err, hipsta stylings, though. Thankfully, they’re minimal at worst.

The reason Hipsta Chez has to try so hard to prove that it isn’t chess is because it really, really looks like it is. You show me a chess board, pieces and two opposing colors, and I’m probably going to call it like I see it. But this is chess played to a whole new set of rules. One player handles both sides of the board, and matching lines is the goal. It’s still a thoughtful game, but it’s something quite different. 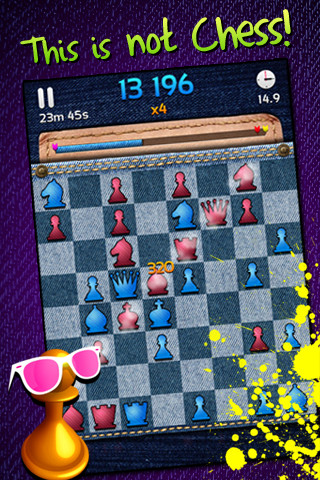 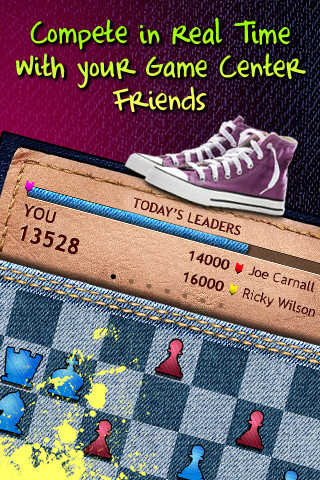 Here’s the set-up: You’ve got pieces of an ordinary chess match arrayed on a board. The pieces move by the rules of chess, and they can capture pieces of the opposing color. But you start with just a few — four for each side. Your goal is to create a line of four or more of the same colored pieces, moving those on either side.

For each move you make that doesn’t complete a line, a penalty is imposed on you and more pieces appear randomly on the board. When all the game’s pieces are arrayed on the board and none remain in reserve, you are given one last chance to make a line or lose. You earn points for each line you create, and the game keeps close track of the pieces you capture. The penalty, however, increases if you capture without completing a line.

This is the majority of the game, though you can play in a few different ways. There are three modes: Normal, Blitz and Super-blitz. Each has endless, 5 minute and 15 minute varieties, with Game Center leaderboards for all. Blitz and Super-blitz are similar to Normal mode, except that each move is subject to a 15 second or 5 second timer respectively. Super-blitz is punishing, and offers a serious challenge.

Hipsta Chez’s achievement system is quite cool, reminiscent of one of my favorite features of Tiny Wings [$0.99]. As you complete groups of achievements, your score multiplier increases. If the leaderboard competition picks up, it will eventually be dominated by those who have put serious time into the game. Some of the top-tier achievements require significant skill and time commitment.

I’m not sure I’ll ever cap off some of those achievements, but I’m having a fantastic time on my way. I enjoy match-3s and their ilk, but Hipsta Chez goes further than most in creating a smart and thoughtful experience. A few early bugs have been squashed in the game’s first update (which also changed the name from Hipster Chess, in case you’re wondering), and thing have been running smoothly for me since. Whether you’re a chess newbie or a veteran looking for a light alternative, this game is worth a look.