jAggy Race [99¢] arrived on the App Store without much fanfare, but this kart-racing game is an impressive debut release from Swiss developers SevenOnly. The goal is to race your little kart around the track within the allotted time. That sounds pretty easy, except the tracks are totally crazy.

They curve down-and-under, so your vehicle ends up racing upside down with 360-degree gravity. You can do massive jumps on the track which send you flying for ages, even around corners, or to other sections of track. If you’ve ever played the snowboarding game iStunt 2 Insane Hills [Free] the tracks are just as crazy, but here you’re on wheels.

There’s no other karts in this game, as you’re solely racing against the clock and trying to avoid crashing. A timer starts beeping if you’re running out of time, which really gets the adrenaline going, but If you take the corners too quickly you’ll fly off the track altogether. Fortunately, there’s mandatory checkpoints which illuminate as you pass and act as a re-spawn point if you wipe-out. This is a game of skill and timing as you can’t simply hold down the accelerator. 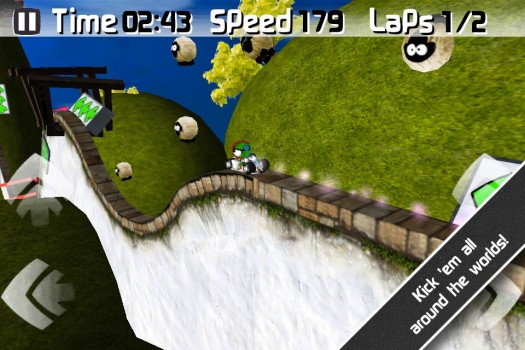 To makes things trickier, there’s obstacles to jump, laser barriers in the air, and large rotating saw blades to avoid. If you ram into an obstacle at full speed the kart bounces back, using up precious time, although you can slam on the brakes and speed forward again. And this game delivers a great sensation of speed, on tracks which grow much longer and more complex as you progress.

There’s 5 tutorial tracks, followed by 3 worlds of five tracks each. When you complete a level, the next level unlocks and you can unlock an additional 3 bonus tracks by scoring three gold wins per world (making 23 tracks in total).  But be warned: It’s not easy to achieve gold results at first, and obstacles can sometimes appear too quickly to avoid if you’re not familiar with the track yet. In jAggy Race, memory and quick reflexes come in handy. 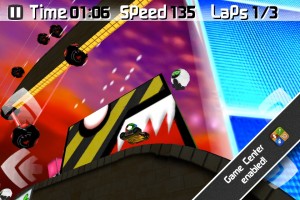 The track is only one-lane wide (as wide as your kart) so there’s no swerving left or right. Instead, there’s buttons to drive forward and backwards on each side of the screen. Or tap both together for braking. Some tracks require a combination of driving forwards and backwards, but there’s always arrows conveniently located  to show you which way to race.

Jump buttons are available on both sides of the screen. While you’re mid-air, you can optionally tilt the device to do flips. If your kart tips over, or is racing along on two wheels, you can shake the device to upright it. Once you’ve mastered the controls, there’s an option to remove the buttons altogether if you choose. The controls in general work really well, and your fingers never obscure the action.

The retina graphics look great and the “camera" panning is super smooth, starting with a wide view of the track and background, zooming in on the car at the starting post and then tracking the car nicely, despite the rapid turns, drops, jumps and loops.

If you look closely, you’ll notice some attention to detail. The kart wheels rotate and Jaggy (which is the name of the driver) looks over his shoulder when in reverse and even blinks occasionally. And the backgrounds are layered with details. There are sheep grazing beside (or sitting upon) the track.  And when the voice says “Ready…go!" at the start, you can accelerate quickly to turbo.

jAggy Race is a fun casual game, but it’s also an exciting and challenging game for competitive gamers who want to familiarize themselves with each track for better results. Game Center leader-boards are provided for each track, plus 46 Game Center achievements. jAggy Race is already a good deal for a buck, but the developers advise that new tracks, additional features and a universal version are being worked on already, which will make this game an even better deal down the road.