Chillingo is pretty reliable when it comes to fun mobile releases, so I went into my experience with Fruit Roll [99¢/HD] expecting to enjoy my time with it. A cheerful, colorful title with a cartoon-inspired style, Fruit Roll foregoes a complex approach in favor of a simple one, which really makes it easy to pick up and never want to put back down.

You play the game as a wide eyed, adorable fruit that must go rolling through sidescrolling levels, jumping through the air in pursuit of stars and other fruits and avoiding creepy-crawlies such as caterpillars and giant red frogs. The game is on rails, so you won’t need to control your movement, only take actions as it’s happening, such as jumping. You have a single jump and a double jump, controlled precisely by a tap or two from your fingertip. Movement is fluid and comfortable to use, so you never have any moments of stabbing at the screen with your finger trying to nail a jump. 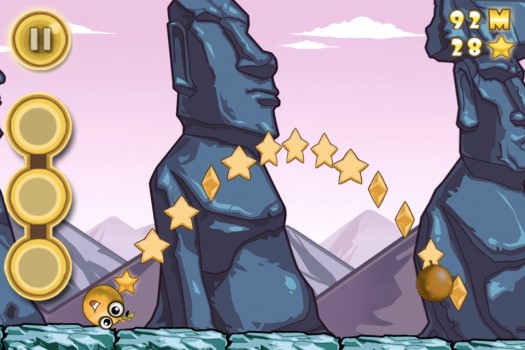 There’s more than meets the eye when it comes to gameplay, though. When you begin, you’ll notice a little bar on the far left of your screen with three slots. As you progress through levels, you’ll not only see stars and enemies, but also fruit you can roll over to pick up. Each one you pick up will be added to this queue, and when you want to, you can tap one of them and become that fruit. This would be fun if it was just for the hell of it, but it actually has a purpose.

By color-coding, you can then take on enemies of a corresponding color by rolling over them, and as long as you are the same color, you’ll knock them out. This lends an element of strategy to the game, as you have to be on your toes to change colors appropriately, all while moving and avoiding enemies of the wrong color (and the game speeds up as you progress through levels, so you’ll have to work hard to keep up). The end of each level also contains a large area of stars that you can double jump your way through to suck up extra points.

Another option is to collect three fruits of the same color, which will transform you into some sort of monster fruit that can barrel past all enemies and grab twice the amount of stars for a short period of time. This is key to making it through some of the harder levels, not to mention it’s a lot of fun to transform into a wacko version of yourself that can take out anything in its path.

One thing I’m not nuts about with Fruit Roll is that all the levels are strung together, creating an endless flow of play until you die by being hit by an enemy of the wrong color. It does help that the terrain changes each time you play, but I couldn’t help but feel it would have been cool to bookmark your progress or finish levels. Fruit Roll is more about racking up points and speed running than it is about level completion, though — your goal will just be to see how far you can make it and how many points you can get in the process.

The game is Game Center enabled and also works with the Crystal network, and it’s definitely the kind of thing that casual gamers will want to come back to over and over to see if they can nudge that high score just a bit further along. It’s a pleasant gaming experience in every way (including the price!), so if you dig great presentation and consistent, engaging gameplay, I think you’ll get a lot of fun out of this one.