Maybe it’s just me, but I have a hard time getting into trailers anymore. Spend enough time following the games industry and you eventually develop an elephantine level of skin thickness to ward off promotion and hype. Even being as jaded as I am towards anything but gameplay footage, every so often, I see a video or promo and I just know in my gut that I’m going to love the game.

It happened for me on the PC with Magicka’s brilliantly funny video campaign earlier this year, and when I saw the trailer for Radballs [$2.99] a gigantic smile spread across my face. I knew that if the execution of the gameplay was even half as clever as Glow Play’s promotional efforts that I’d have a pretty wicked time on my hands. Now that the game is out? Well, I shan’t mince words any longer; my expectations were both met and exceeded.

Radballs is first and foremost (for me) an 80’s retro lovefest. Don’t confuse my meaning here; I’m not talking 8-bit sprites but rather the type of art style that screams Breakin’. The colors, the patterns, and entire aesthetic are simply spot on nailed. As a gamer raised in the 80’s, I found myself awash in memories of parachute pants, Z Cavariccis, Hypercolor t-shirts, Front 242, KMFDM, Ministry, New Order, and adolescent shame grown fuzzy over time. 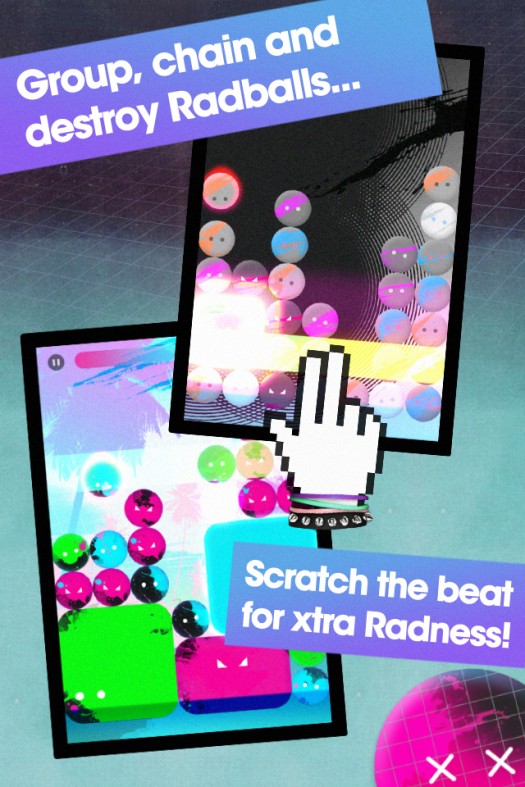 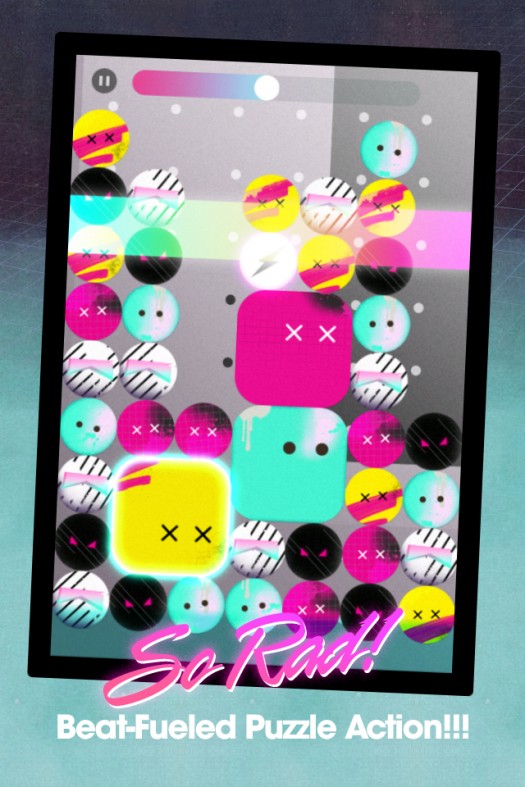 The music for the game is fantastic, and kudos to Neil Voss’ (New Tetris, Tetrisphere) work producing the soundtrack. I know I just mentioned a bunch of new wave and industrial bands, but that’s not what this game is about. It’s a mix of original electro tunes, tracks from lesser known artists but excellent dudes like Daze and Com Truise, and even some remixes of a few songs by Ok Go. Despite being from contemporary musicians, the electro/synth angle on all the tracks complements the games 80’s vibe, dare I say, to the max?

Honestly, the phrase “match-3” has such a stigma on it now that it’s hardly fair to use it for fear that you will turn people off before they’ve given a game a fair shake. But, that’s the inspiration for Radballs’ gameplay. Instead of lining up 3 Radballs, the goal is to build at least a 2×2 formation that then fuses into a MegaRadball. You can add additional Radballs to the formation to increase the size. The larger the MegaRadball is when it is cleared from the board, the more radness gets added to your meter. I’ll come back to the meter in a bit. 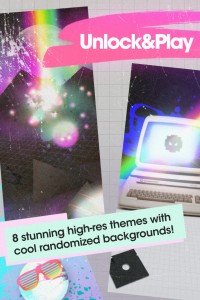 The way music is integrated into the game mechanics is simple and elegant. Timed to the beat of whatever track is playing, a wave will periodically travel down the screen and clear any formed MegaRadballs it passes over. The cool mechanic here is that you can directly manipulate the wave. Touch the wave and flick it back upwards, and you can buy yourself more time to build larger/more MegaRadballs to increase your bonus.

Even more tubular, however, is the fact that you can grab the wave and scratch it back and forth over a MegaRadball to charge it up for extra radness. Manipulating the wave directly affects the music as if you were scratching or cutting on a record. It’s this integration of the auditory experience driving the gameplay and vice versa that transforms what might otherwise be horribly vanilla into something unique and outstanding.

Now, back to the radness meter. Radballs handles its difficulty curve better than almost any game I’ve ever seen on the App Store. The game is not over when your screen fills with Radballs, it just gives you more material for matching. The only way you can lose is if your radness meter depletes over time. As you progress through the different levels, the meter depletes faster. This requires you to employ more advanced tactics and learn to effectively use the few available power-ups to be successful.

For example, setting up a cascade where a MegaRadball being cleared results in another fusing together creates additional radness. Even though it took me some time to get the hang of setting up those complex formations in advance, if the meter ever started running low, I could buy myself just enough time on the radness meter to keep from losing by relying on the techniques I’d already mastered.

So, while the game forces you to get better, you aren’t punished as you’re learning. The skills you’ve practiced will keep you alive enough to evolve your strategy as the game ramps up. This makes for a smooth and enjoyable ride throughout the course of the game, and eliminates the ragequit factor so prevalent in titles where time is a factor. This gives Radballs a bump up in the “just one more round” category.

Contributing to the game’s longevity are two important features. Going to the settings on any level will allow you to switch from arcade mode (which ends when you clear 8 radness meters) to an endless mode that only stops when your meter depletes. This is perfect for when you just want to zone out to the music; pick a difficulty level that works for your chilling out needs and then just kick back and get rad.

Taking nothing away from the stellar soundtrack that comes included with Radballs, the music for any game gets old over time. Glow Play’s masterstroke here was to build in the ability for players to use their own music tracks. Following the trail blazed by games like Audiosurf and Beat Hazard, this feature takes your songs and synchronizes the beat wave accordingly. You aren’t just listening to your music – you’re playing to it. Scratching with the beat wave has the same effect on imported tracks as native ones, making for some fun emergent experiences with songs you know and love.

Add tight and responsive touch controls to a list that includes fabulous art design, awesome music, a new twist on an old mechanic, and the ability to bring in your own tracks and you end up with an experience easily worth your time and money. Oh, did I mention it’s universal? Well, it is, and I highly recommend it. Your friends and peers in the forums already know what the score is. Fire up a John Hughes flick and download it when you get a chance.