If this review had the same layout as Avalon Wars [Free], here’s how you would get a feel for what the game is like. First, you’d go to the reviewer’s home base screen. For now, ignore the individual game-mechanic analysis buildings titled Combat, Resource Management, Base Building, Troop/Hero Development, and MMO Elements; we’ll come back to those later in the tutorial. To start, simply click on the Review Overview Command Center. Once on the Overview Command Center screen, you’ll select the Review Introduction tab. Choose “Two Paragraphs” as your option from the Review Length sub-menu.

Now, exit the Command Center and scroll over to the Reviewers’ Barracks. Enter the Barracks and select my name from the list of recruited reviewers. Drill down into the Writing Skills menu and click the sub-menu tab for Add New Skill. Spend 30 TAPs (TouchArcade Points) to activate the skill “Analogy Synopsis”. If you lack the necessary TAPs to activate the skill, a modest in-browser purchase will get you more to speed up the process. Now, launch the reviewer and see him crank out a brief overview of the experience of playing Avalon Wars in the style of Avalon Wars.

If you’re still reading at this point, you may just be the kind of person who will love the hell out of this game. 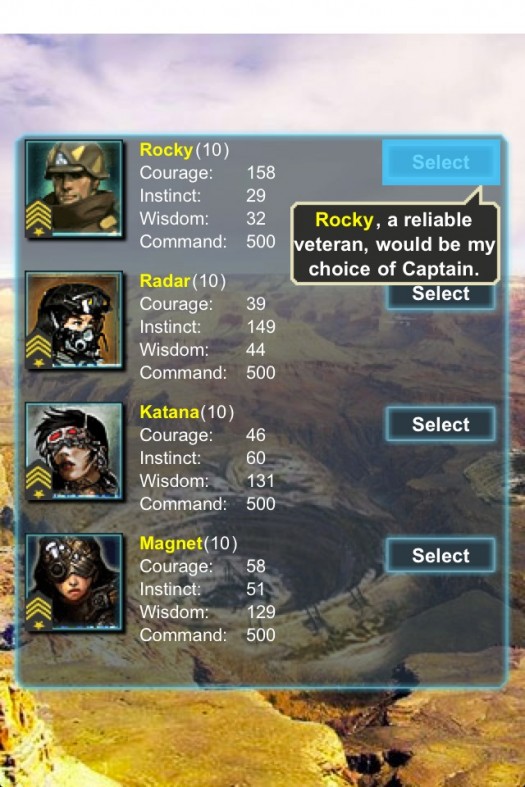 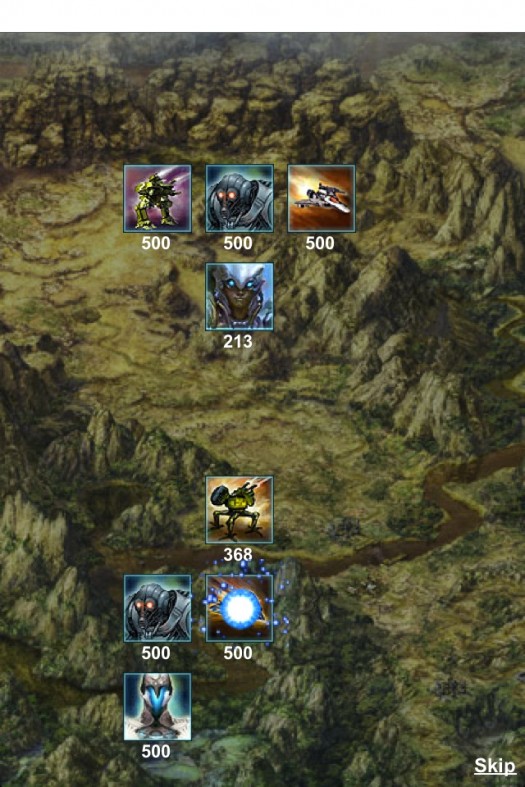 Avalon Wars is a strategy MMO which places you in charge of a regiment from one of 3 initial factions. By developing your base, your technology, and your troops, you prepare yourself to face off against players from other factions or against the computer controlled Rogues. Why all the fighting? Well, the planet of Avalon is the only source of a valuable substance called Domistal, and he who controls the Domistal controls the universe.

Incidentally, Domistal is also the basis for being able to charge micro-transactions to players who are bottle-necked in their production process. Thankfully, this is not a common occurrence. If the intro didn’t properly convey my point: this game is thick. There are many different types of resources in Avalon Wars, and they’re not all required for every action. There’s always some facet of the game to be focusing on that won’t require the resource you’re short on. 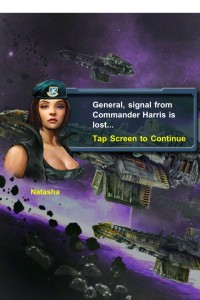 The main focus of the game is in building and upgrading your base. There are a multitude of structures to erect, and the options for prioritization in your build order are legion. Focusing on resource management alone will prevent you from earning all the rewards that come from winning battles, but focusing on troop development too much will find you quickly overmatched once you begin running into enemies with better tech than you, which will send you right back to develop your base/troops more.

Thankfully, the game does offer some valuable assistance in the form of a lengthy and detailed tutorial. The poorly localized but thorough tutorial text is distractingly presented on the generous cartoon cleavage of your lieutenant, who will guide you through the functions and strategy for your initial base-building and combat skills. Once she’s done showing you the ropes, you’re free to tackle the insane number of quests, jobs, and challenges the game has to offer. 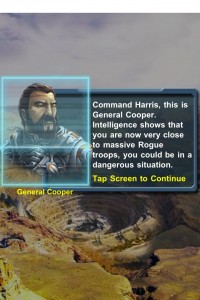 Once you have your resource gathering structures functioning well, you’ll move on to focusing on generating troops and recruiting heroes to lead them. Once you’ve got them on your team, you’ll research new technology to equip them, train them to raise their stats and gain new abilities, outfit them with an endless stream of purchasable gear, and then put them in charge of a regiment of soldiers. This is where the min/maxing gets crazy, as certain hero stats match perfectly with different troop types. Jack-of-all-trade heroes are worthless in combat.

Combat is where the game begins to fall short, unfortunately. There’s the illusion of strategic depth when it comes to the way you build formations of different troop types, but beyond the obvious “put your tank units up front and your weak death-dealers in back”, you won’t find a lot of variation in the tactics required to succeed. Victory is almost entirely predicated on how well you’ve developed your team and their stats prior to the fight. Once the fight begins, the game automatically plays out the turn-based affair, doles out your rewards, and sends you home to pick up your shovel and go back to digging through sub-menus.

The MMO aspects of the game are nice to have, but like the core gameplay are extremely cumbersome to manage. Avalon Wars offers the ability to form legions (read: guilds) with other players, and offers chat-rooms to organize and shoot the breeze. Unfortunately, it’s all so unwieldy that you’re hardly compelled to jump through the additional hoops to engage with other players. Taking into consideration that most PvP battles leave you either dramatically overpowered or underpowered compared to your opponent, treating this game as a single player experience might be wise. 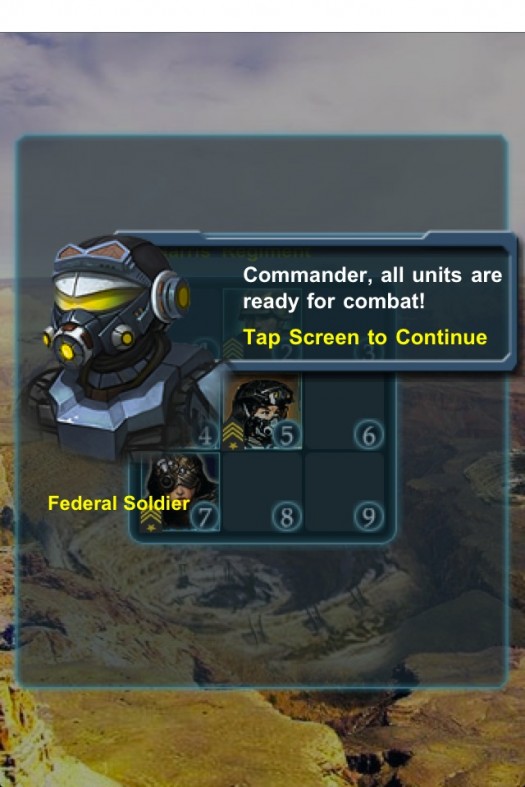 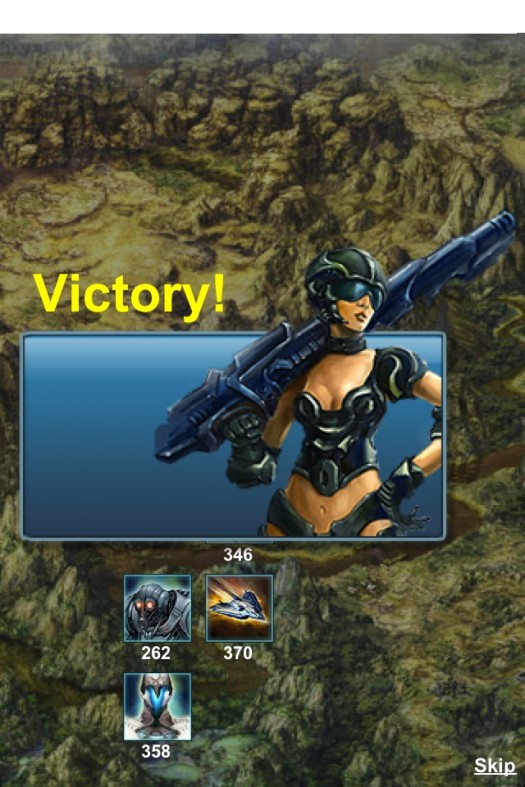 Some gamers love the experience of crafting the perfect fighting force and sending it out to annihilate the enemy. The building, the tweaking, and the arcane knowledge of every tiny sub-menu are the draws of this type of game for them. Like Sun Tzu said in The Art of War, “Every battle is won before it is fought.”

Others thrive on the uncertainty of the moment and the adrenaline that comes with the possibility of defeat. These sorts will be absolutely turned off by the labyrinthine user interface, the lack of balance, and the insane amount of patience it takes to really begin succeeding at the game’s core mechanics.

As for me, I found myself fascinated at first and impressed with the level of depth the game offered. However, the lack of combat challenge wore on me, and I disliked having to relearn all the menus whenever I had to put the game down for a while. I really appreciated that I never felt forced to rely on IAPs to get to the fun aspects of the game, but I didn’t find myself compelled to dive into Avalon Wars for the long haul. At the low price of free, it can’t hurt to pick it up and make up your own mind if you’ve had the interest and fortitude to see this review to its conclusion.