Here’s one I’m so anxious to share that I’m fumbling over my fingers here at the keyboard. Brandon Williamson over at Nyarlu Labs just sent me the heads-up on some major updates to one of the very best games I have ever played in my entire life, on any platform. The game in question is the modern retro title Forget-Me-Not [App Store] that easily got a five-star rating in my March review (which I urge the unacquainted to read, to get an idea of what the game is all about). 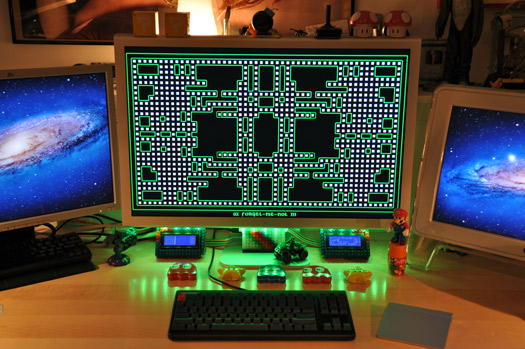 Brandon, yesterday, made a post to his blog announcing the release of a Mac OS X and Windows version of Forget-Me-Not that can be downloaded from his website. And it’s freeware! It’s not just some dumbed-down, redheaded stepchild build of the game, either — no, no. The free Mac and PC versions of the game are, in fact, the latest, most full-featured versions of the game, bringing many enhancements over the current iOS version.

Some of the new features found in these new versions:

Fans of the iOS game need not feel left out, however. All of these changes are headed to iOS in a coming update, along with full iCade support! Brandon tells me that the controls have been rewritten for eight-directional joysticks (which the PC version supports, but not yet the Mac) and he feels the game will work quite nicely on the iCade. Touchscreen controls will, of course, be maintained in the iOS version, but with a few speed tweaks to prevent things from getting too fast to play.

Have a look at the iOS game in action:

If you happen to own either a Mac or a PC, there is no excuse for not grabbing this free game, immediately.