I’ll cut right to the chase here, as there is no reason to beat around the bush when it comes to a game this awesome: Jetpack Joyride is one of the best iOS games I’ve played in a very long time. It’s typical Halfbrick from top to bottom. If you’re not familiar with their previous titles, I’ll quickly outline what makes them so good, as all of this applies to describing Jetpack Joyride.

Halfbrick seems to have a nearly supernatural ability to take a genre on the App Store that’s totally flooded, tired, and jam packed with stale iteration from way too many developers attempting to get in on that particular craze and make it incredible. They do this by nailing the core gameplay in every way it could possibly be nailed, applying their flawless pixel-art, deploying Barry Steakfries, and adding all kinds of hooks to keep you playing. 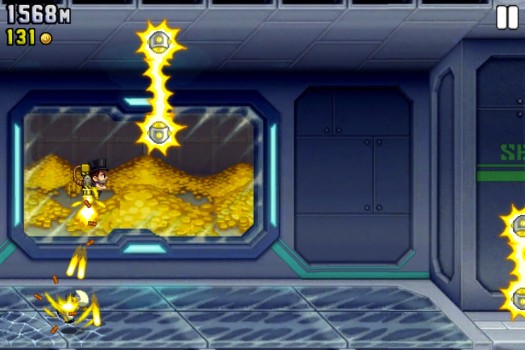 In the case of Jetpack Joyride, Halfbrick has taken the cave flyer formula which has been done to death and via their seemingly trademarked Australian majicks created a game that I simply cannot put down. In fact, just writing this article is proving to be difficult because every time I go back to the game to add something to my notes, I find 15 minutes has flown by as I’ve endlessly sent Mr. Steakfries to his doom via lasers, missiles, and zappers.

The controls are rock solid, and work via the standard tried and true single button approach where you touch the screen to power up the thrusters of Barry’s jetpack, and release to send him falling back down. Powerups are plentiful via vehicles that you can ride in that all behave very differently. These vehicles serve as a temporary shield of sorts, and will allow you to, for instance, take a missile to the face without ending your flight. 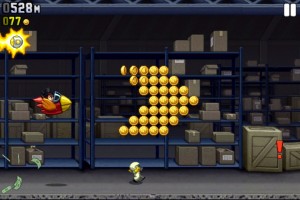 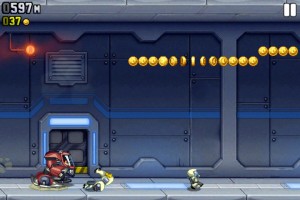 Jetpack Joyride has a fabulous atmosphere to it, and really reminds me a lot of Shadow Complex, Chair Entertainment’s incredible Meroidvania Xbox Live Arcade Game released before Infinity Blade. You fly through a mysterious underground lair, and pass through various sectors that all have a distinctly different feel to them. You’ll pass by Indiana Jones-like warehouses filled with mysterious crates, underwater tunnels, Scrooge McDuck-esque gold bins, laboratories, and more. The amount of variety is incredible.

Speaking of laboratories, Halfbrick seems to be on the forefront of scientific advancement when it comes to injecting replay value into their games. Jetpack Joyride has all the replay value of your typical randomized endless runner/flier along with three separate systems that have succeeded in making me play for hours. 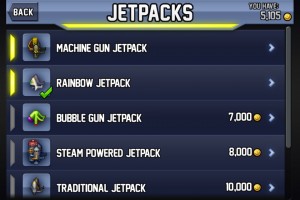 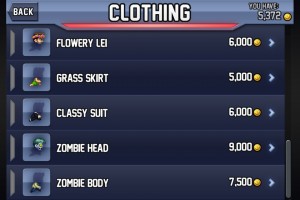 First off, for whatever reason, this underground lair you’re flying through is loaded to the brim with coins. You collect these coins to spend on a plethora of unlockables ranging from single-user power ups to cosmetic add ons like new jetpacks or clothing. There’s no shortage of stuff to work towards either.

Secondly, the mission system gives a otherwise random game with no real objective aside from “see how far you can go" a purpose. You’ll always have three missions to accomplish, and there is similarly tons of variety to them. Early on, many of these goals will be fairly simple and ask you to do things like travel 1000 meters, which is tallied across multiple runs. Later on though, as you rank up in the game, they get ridiculously challenging and attempting to beat a particularly brutal mission gives a whole new purpose to the game. 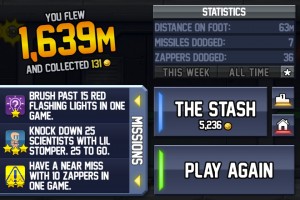 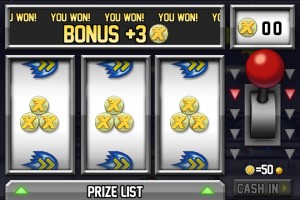 Last, but not least by any stretch of the imagination, is the spin token system. Also flying through the game are tokens which you can fly into to collect that are used after you finally die. Each token allows you to spin an in-game slot machine which has minor effects such as rewarding some coins to blasting you forward a little bit. If you’re really lucky, you’ll hit three hearts on the slots which will bring you back to life right where you left off. My favorite though, are the boosts to your next game where you can potentially get a 750 meter head start and/or get double coins. And really, if you just scored double coins on your next run, there’s basically no way that you’re going to put the game down without one more go.

I could gush about this game for hours, but, I’ve got to save something for our review which I can safely sum up for you right now: Jetpack Joyride is amazing, it’s a dollar, it’s universal, and as soon as it’s available it should be on whatever iOS device(s) you own.

In other news, check out the latest developer diary where Halfbrick goes over some of the things I’ve already mentioned here, but you can see them in action:

Jetpack Joyride will be available this coming Thursday, September 1st– And really, if you’ve got a time machine, you need to fire that bad boy up and fast forward to then because you simply need to play this game.