There is no shortage of fantastic retro-RPGs in the App Store at the moment, but Muteki Corporation‘s Dragon Fantasy [$2.99] hopes to set itself apart from the rest with tongue-in-cheek dialogue and an authentic 8-bit look and feel.

The game sticks to its roots in more than just its look, the world is populated with things you’ve seen before like trees, mountains, plenty of grassland and monsters. But where most retro-RPGs are content to ape not only their context, but also their story and heroic mannerisms, Dragon Fantasy sidesteps the hero-journey slightly by offering a different take on the hero and his enemies.

You take on the roll of Ogden, an ageing bald man with a beard who ends up resigning his post as the captain of the royal guard. Does that sound familiar? Well, before you do that, you first get transported to an old man’s house after an evil knight comes and makes the queen sick. Once there, you wake up in a confused state and need to make your way back to the queen as quickly as possible. 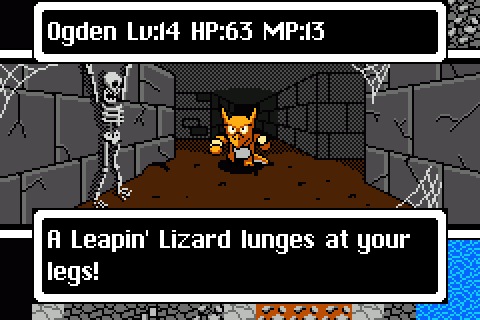 A few quests here and there and you get back to her, get her healed up and decide to take on the task of becoming a true hero by finding the hero’s armor spread out across the land. Eventually, after six or seven hours, you get to use that armor against the dark knight.

The majority of your time with Dragon Fantasy is going to be spent grinding against a variety of silly enemies. The core of its humor lies in its usage of goofy language to describe fights, and while you’ll run into equally outrageous dialogue in each of the towns, you’ll find the enemies are where the real charm is. There’s a good variety in them as well and it helps make each of the random, turn-based battles less tedious than other RPGs of this ilk. 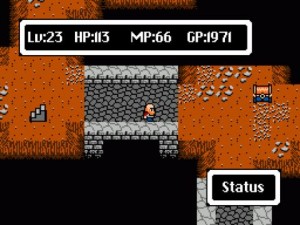 Of course, if you’ve played an 8-bit RPG you’ll know mostly what to expect, for better or worse. As mentioned above, battles are random and turn-based, and the look and sound is dedicated to keeping within the limits of the 8-bit era. The premise here is to keep things as streamlined and simple as possible at all times. For the most part, the screen is bare, showing you just the world and your character, with a disappearing movement stick and menu screen that only appear when you need them.

The streamlining is welcome here, but it comes with a few serious faults. Equipment, for instance, have no visible stats, so you don’t really know how much better a weapon or piece of armor is. You can certainly assume that based on the price, one sword is better than another, but its difficult to decide if you should spend your time grinding to get enough money to buy it or not. Instead, you’ll just get a little one-line joke description of the item.

Money is an issue too, but it’s mostly due to a very simple and very odd concession Muteki seems to have made in bringing this game to a modern audience. When you die, you get kicked back to the last save spot, but you lose half your money and keep the items and XP you’ve earned. That alone isn’t a big deal, but the fact you can’t choose whether you’d like to do that, or just revert back to the last save state makes saving up gold a tedious process. You can force quit and reload, but there is no simple way to do it in-game.

The rest of the game does a fantastic job of retaining its roots and keeping things goofy and interesting. It’s not going to send you rolling on the floor in fits of laughter, but it’ll make you chuckle now and again, which is more than most RPGs could ever even hope to do. It’s always nice to see a story that doesn’t take itself too seriously and in that way, Dragon Fantasy gets a lot of things right. It even features a few witty winks and nods to other games and inspirations. If you pay close enough attention, you’ll catch some solid jokes strewn about.

The simplicity isn’t a bad thing, but the over-simplified death and reload is incredibly aggravating. And while the joke-descriptions on all the items are fun, they don’t really help you understand what they do or how well they do it. Despite these shortcomings, and the fact that retro RPGs have been done to death, Dragon Fantasy offers a lighthearted and enjoyable take on the genre that practically everyone can enjoy.