Sprinkle [99¢] by Mediocre and Fabrication Games, is a water-squirting platform puzzler. The Swedish developers were pretty brave to take on this project as their debut release, as it’s always challenging to represent water in a game, but they’ve really managed to pull it off. The water flows, splashes, pools up, makes waves, moves objects and surges, just as you’d expect it to. The water physics in this game look wonderful and are definitely the main attraction.

At the start of each level, a cute little red fire-truck arrives at the scene of a fire. You can adjust the height of the trucks crane by dragging it up or down, and you can also tilt the angle of the water cannon by swiping. Once the nozzle is aimed in the right direction, simply tap or hold the red button to squirt water. And the water does actually squirt. You can see the main stream of the flow with little bits shooting off, just like when you turned the hose on your family members as a kid. And it still feels good to squirt that H20! 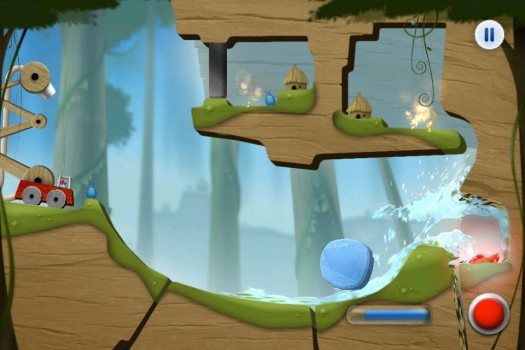 This game is already being compared to Feed Me Oil [99c/ Review], which is also based on a liquid. However, the game-play of these two titles is actually completely different. In Feed me Oil, you’re trying to pour thick black goop into a particular zone on the screen. Whereas in Sprinkle it doesn’t matter where the water ends up, providing you put out the stubborn fires before your water supply runs out. And Sprinkle is set on one of Saturn’s Moons, so there’s little alien creatures inhabiting the levels.

There’s four worlds provided at launch, with 46 levels in total. The key to unlocking the levels isn’t speed as you might anticipate – instead, it’s all about water conservation.  There’s a little gauge at the bottom of the screen, which indicates how much of your water supply remains. The less water you use, the more blue water droplets you earn.

The blue droplets are used to unlock levels. If you obtain the maximum 5 droplets for all levels in a world, the next world is unlocked (which isn’t made clear in the game). Or, if you can’t be bothered with that, you can make optional in-app purchases for worlds 3 and 4, which also unlocks the earlier levels.  My main concern about this game was the number of levels, however I’ve been assured that additional levels are already planned for release soon.

Each level contains objects like blocks, ice and boulders to drag or hose into position, structures and mechanisms to manipulate with water and buttons to activate. The first world is pretty straightforward and can be solved by squirting water in the obvious directions, but then some puzzle elements are introduced to makes things more challenging. For example, you’ll have to plan how to make your water reach each fire, because moving an object to drench one fire may unintentionally block the path to another. And just when you think all the fires are under control, a fireball might suddenly arrive from space, sparking brand new blazes.

Sprinkle has the cuteness factor turned up to high, with the fire-truck and little alien creatures looking adorable. The music deserves a mention too, for being catchy. And it’s fun to squirt water through a small gap and have it erupt out the other side, like a geyser. Yup, splashing water around never gets old, so this new visually-appealing universal game will probably make a splash.