Like Tower Defense, one of the genres that saw a resurgence with the advent of iOS gaming is the ‘Sniper’ genre. Typically relegated to the flash games scene, the touch screen, accelerometer and gyroscopic controls of iOS devices seemed like a natural fit for Sniper games. This lead to an explosion of a wide variety of titles that all sought to put you behind the scope of a sniper rifle.

Hired Gun 3D [$0.99], the newest game from Triniti Interactive, is the latest Sniper game to hit the market. Described as a sequel to Triniti’s previous stick-figured sniper title, Hired Gun 3D lookes to up the ante with a revamped graphics engine as well as some improvements to the general gameplay. While it does end up as a marked improvement on its predecessor in an assortment of different ways, Hired Gun 3D fails to differentiate itself from the rest of the Sniper crowd.

If you’re unfamiliar with the Sniper shooter genre, let me set the scene for Hired Gun 3D: each mission tasks you with taking out a specific target in one of eight different environments. You’ll initially start zoomed out watching everyone walk by. Once you spot your man, tap on the screen to zoom in via your scope and once you’ve got him in your cross-hairs, all you have to do is shoot him to get credit for the kill. Missions have you killing multiples of the same target within a certain amount of time. After each successful mission, you earn cash that lets you buy and upgrade bigger and better sniper rifles. As with most sniper games, Hired Gun 3D is all about patience, precision, and observance. 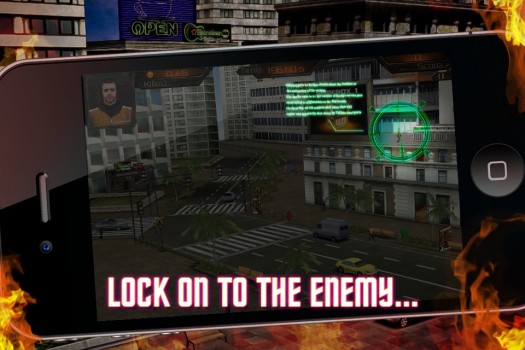 Overall, Hired Gun 3D manages to satisfy those three tenants of sniper games. Each mission location is filled with random civilians, which not only increases the overall ambience but also forces you to pay extra attention to your target. Thankfully, the game’s accelerometer controls are relatively smooth and allow you the precision necessary to adequately track and target your victims. Hired Gun 3D’s visuals are also well done and are vastly improved over its predecessor. The upgrade system also does a good job of prolonging replayability, although I would have liked descriptions as to what exactly you’re getting when you upgrade the various stats on each gun (as well as a price tag for each upgrade).

Hired Gun 3D succeeds at being a decent sniper game, but there are some annoying design issues that bring the overall gameplay experience down. While the accelerometer controls do a good job of allowing you to track and take down your targets, the optional joystick controls are horrendous. Unfortunately, this makes the game almost unplayable when you’re in a situation that prevents you from moving your device around in a precise manner. The zoom controls while scoped seemed erratic as they would occasionally throw me out of zoom mode forcing me to have to re-aim, taking precious time off the mission clock. In addition, even though Hired Gun 3D is a paid app with IAP, all the menus still have annoying ads for other Triniti Interactive titles. While this doesn’t really affect gameplay, it seems an odd choice to subject your paying customers to ads. 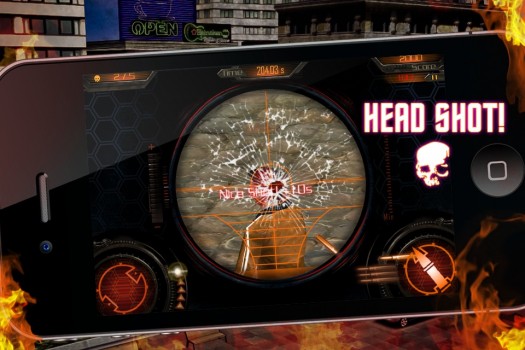 One of the biggest concerns I have with Hired Gun 3D is  the overall lack of variety. One of the game’s selling points is the fact that there are an unlimited amount of missions to play and earn money, but they all play exactly the same way. Your target is always one of a handful of people and, while I enjoyed the mission environments, they get old pretty quickly. Even just a little more variety would have made the game far easier to enjoy. The fact that there’s no story or motivation to continue playing (besides upgrading your weapons) doesn’t help either.

Hired Gun 3D does a good job of providing you the average sniper experience. Unfortunately, that’s all it does. If you’re a fan of similar games, then Hired Gun 3D is worth a try simply because it’s a new game and doesn’t suck. However, if you’re a newcomer or not necessarily a fan of sniper shooters, don’t expect it to convert you.