Croma [$0.99/HD/HD Free], a shooter by Mindfruit Interactive, looks like a new game – its aesthetic is modern and minimal, sporting the en vogue polarity-switching system of games like Ikaruga and Outland.

But the philosophy that drives its design – perform one action for as long as possible until you inevitably fail – is a very old one indeed, and its reemergence has been one of the by-blows of the growth of the iOS gaming scene (perhaps most visibly in the nascent runner genre). You can trace this quarter-munching mentality from Asteroids to Ski Free to Geometry Wars to Canabalt, but Croma comes full circle – it’s more or less a touch-enabled version of Missile Command.

Croma is a straightforward game, all in all: players are tasked with defending a small circle at the bottom of the screen by shooting physics-enabled pellets at descending meteors of varying size, weight, and color. 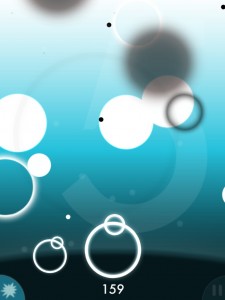 Tapping your circle changes its polarity from black to white; tapping anywhere sprays an endless stream of bullets (or lasers, depending on your power-ups), which don’t destroy the oncoming meteors as much as they push them  off the screen. White bullets interact with the white globes, and black with black – an appropriate mechanic, given the Ikaruga name-drop in Croma’s AppStore description.

Enemies come in waves, each capped off by a monstrously big sphere lumbering, like a wayward asteroid, toward you. The screen shakes, the music gives way to deep-rooted rumblings, and the cataclysm is on. The heavier spheres have more momentum and require more bullets to fend off; avoiding the apocalypse invariably feels triumphant. When an invading object inevitably breaches your defenses, Croma simply tells you how long you managed to survive.

And that’s the real beauty of Croma: these arcade-style games tend to pick one emotionally fraught verb and bear down on it until the player hits a breaking point. In Asteroids, that verb was destroy; in Canabalt, escape; in Croma, defend. Croma doesn’t have the narrative trappings that make mechanically similar games like Missile Command so evocative — remember that it was saddled with a 70s zeitgeist of cultural anxiety over nuclear holocaust. Nevertheless, there’s something primordial about defending oneself from harm, even if that harm is abstracted into black and white bubbles. 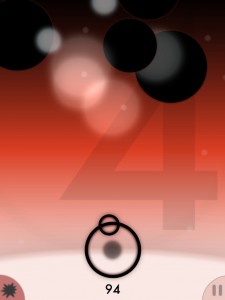 Croma is, if nothing else, undeniably slick. The clean lines and vivid, monochromatic colors are a treat, and the sound design is remarkable. The controls are generally responsive and tight, though things get messy when enemy globules get close to your shooter –instead of switching polarities just in time, you may find yourself spraying useless black bullets at white invaders. The inverse is also true: instead of squeezing a few desperate bullets at a quickly approaching sphere, you may just impotently switch the color scheme back and forth.

Whether or not this is shoddy implementation or cruel design is up for debate – the problem is largely mitigated by your access to a screen-wiping bomb (though the minute-long cooldown is wicked in a game that only lasts on average, for me, 180 seconds). My gut, though, says that multi-touch support would solve this singular niggle in Croma’s design. If nothing else, it forces you to play economically and efficiently, doing just enough to deter one meteor before focusing your attention on the next.

Croma isn’t a bad game, by any stretch – in fact, I enjoy it a lot. But it is a simple game, one that might endure in the same way that Canabalt endures, something to come back to when an errant OpenFeint notification reminds you how easy it is to kill an afternoon chasing the dragon. For that to happen, Croma needs to expand its user base to include your friends and family, a tall order for a $1.99 game on the fickle and predatory App Store. Simplicity and elegance can be useful hooks – a rarity for most games – but I’m skeptical of their ability to do for Croma what they did for Canabalt.