Ever since the moment as a child where I first saw Kyle MacLachlan crush a metal-underpantsed Sting with the force of a single word in Dune, I’ve wanted a game that gave me that same feeling of power. Any time I re-watch an episode of Star Trek: The Next Generation where the holodeck is featured, I find myself wishing that spoken controls were a bigger part of gaming. I mean, TNG accurately predicted the tablet computer, why can’t we have voice commands that work, too?

Discounting rhythm games like Rock Band where vocal input allows for no deviation, the only contemporary title I can think of that has tackled the problem with any degree of competency is Tom Clancy’s End War. Unfortunately, voice controls in games are essentially like tequila shots. They sound like the best idea in the world at the time, but a few hours later you just end up disoriented, frustrated, and violently nauseous. It was in such a cavalier mood that I chose to pick up Starglow Magic Spells [Free], and I am now paying the price. 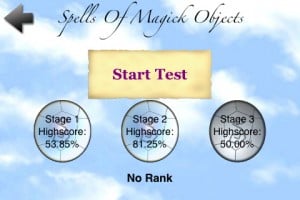 The game puts you in the role of an apprentice magician who must learn five different classes of spells in order to graduate from wizard school. Each spell is a series of words and syllables, where you must determine the correct phonetic pronunciation and then speak the resulting Simlish-like gibberish into your phone. The game then spits back how many of the words of the spell you got correct. Thankfully, there’s a practice mode that allows you to suss out the correct emphasis and intonations prior to testing your diction with the teachers of the five classes of magic.

This game’s only saving grace is that once you figure out what pronunciation a given spell is looking for, the voice recognition part of the software works fantastically. The problem is that the phonetic rules are often difficult to decipher and don’t appear to remain constant from class to class (or even spell to spell). As such, you’ll find yourself rapidly getting angrier and angrier with the game. You know those new-fangled automated customer service systems that have you slowly over-pronouncing words (i.e. “Billing. Bill-ing. BILL-ing. Bill-ING. Billing! BILLING!!! ARRRGHEGGHGAHGAH!”) into your phone? That’s essentially the entire experience of playing Starglow Magic Spells. 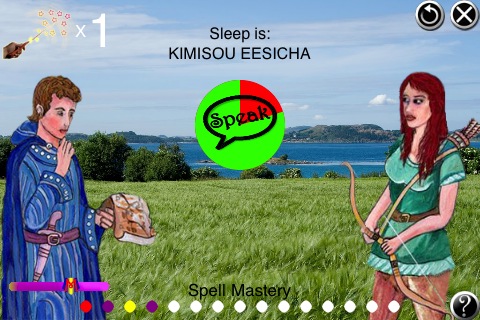 Then there’s the issue of feedback and payoff. What’s my reward for practicing until I get a spell right? I get to move on to the next spell! There’s no reinforcement of success whatsoever. I just spent 5 minutes talking baby talk and you can’t even show me a static drawing of the wall of flame I supposedly summoned? That’s ca-ca. 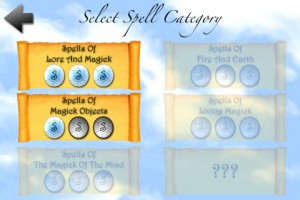 I was done with the game after I completed two classes, which ended up being wildly convenient, as this is when the pay wall hit. In the interests of masochistic science, I attempted to hit the IAP to unlock the three remaining schools only to get an error every time. So, now I’m an involuntary magic school drop-out, and I feel like a better man for it despite the stigma I now face when socializing in professional mage circles. The game does have a multiplayer mode available to allow you to face off against other spellcasters, but unfortunately, I was never able to find an opponent to test my incoherent mutterings with. Maybe that’s because Arcane U is out on summer vacation?

My wife walked into the office where I was playing Starglow Magic Spells a few days ago. At first, she stopped and looked at me cockeyed in confusion. Then, she stared at me blankly, not believing. Finally she shrugged, and walked away snickering and shaking her head. I can’t think of a better summary of this game than that. I applaud the developers for trying to tackle a difficult game design problem and for the precision of their voice recognition work. That being said, I’d advise keeping your distance unless you like the idea of being that crazy vagrant outside the 7-11 who keeps arguing with his hand.