While some traditional publishers are resisting the trends towards lower-cost software in the handheld gaming space, others are actively working to figure out how to make these sorts of experiences work on their existing platforms. While not a shining beacon of success, the PSP Minis campaign does demonstrate a good faith effort on the part of Sony to cater to the direction that portable gaming seems to be heading. A few growing pains are part and parcel of adapting to a changing market, and there have been a few notable early wins scattered through the program.

One of the largest of these successes has been Frima Games’ A Space Shooter for Two Bucks, which recently reported a healthy figure of 150,000 downloads over PSN. Given the type of game they made, and its popularity on PSP, it’s no surprise that the developers worked to port the title over to the iPhone. Making its debut on iOS as A Space Shooter For Free [Free/HD], this game retains all the good elements from its PSP origin and joins a catalog of solid shmups available on the platform.

A Space Shooter For Free is the story of P. Jefferson, an optimistic and nerdy kid who is relentlessly tortured by bullies at school. Much like our own Brad Nicholson, Jefferson turns to obsessive weightlifting and unjustified xenophobia as a means of dealing with his repressed rage issues. Equal parts bravado and libido, he’s essentially a mash-up of Zap Brannigan and Duke Nukem. 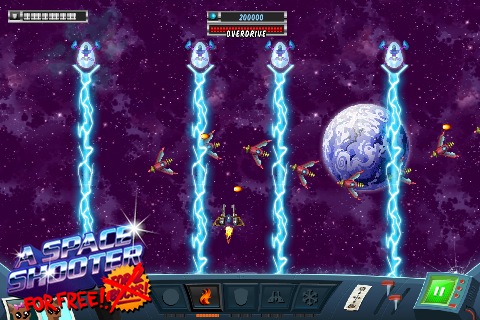 However, unlike the Duke, this universe does not celebrate his misogyny or misbehaviors, making the character much more tolerable. The story and dialogue are snappily done in comic-book panel style, and Jefferson’s pathetic attempts to “court” the older woman who runs the upgrade store were just cheesy enough to keep me coming back to see if the idiot could pull it off.

Let me start off the gameplay discussion by stating that this game is no Cave title; if you’re looking to have your socks blown off by god-tier bullet hell action, this is not the one for you. That being said, Frima blends a cornucopia of strong elements into ASSFF that give the game tons of depth and replay value. 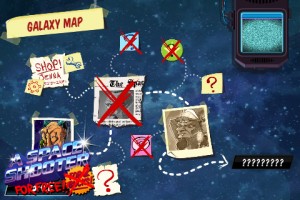 In standard vertical-scrolling space shooter fashion, enemies of varying types will converge on your ship from all directions. Memorizing their attack patterns and behaviors will be the key to your success, as will scooping up the power-ups that destroyed baddies leave on the screen. The usual suspects are all here: shields, missiles, and main gun bumps give your ship a temporary boost in fighting power. Some missions will be against standard waves of aliens, and some will feature boss characters to defeat. Clearing a boss stage will provide your ship with one of five special weapons that is persistent throughout the rest of the game.

Speaking of persistent, along with your temporary power-ups, you’ll be collecting scrap/currency that you can use in-between missions to purchase permanent upgrades to your ship. There’s a great deal of variety here, and the desire to grind out enough scratch to get the next upgrade kept me motivated to pew-pew bravely on. Adding spread to your main cannon, magnets to pull scrap in for you, devices to increase the power or reduce the energy cost of special weapons, and items that maximize the efficiency of temporary power-ups are all options.

Difficulty between stages can vary wildly, and so if you play solely in the campaign mode you’ll find yourself needing to grind in order to upgrade enough to tackle later sectors. This is the perfect time to take a break and check out the survival mode. It’s your standard wave-after-wave affair, but the high-score push is a draw, and Frima smartly allows any currency you earn in survival mode to carry back over into the campaign.

ASSFF falls into the same control traps that many iPhone shmups do. The touch controls feels right and auto-fire helps the cause, but especially when the difficulty begins to mount you’ll be covering vital parts of the action with your finger. The position of special weapons also make them difficult to activate without leaving your ship unprotected in a sea of murderous plasma bolts while you trigger them.

The game (as you’d rightly expect by the title) is free to download, and there’s more than enough content before the pay wall to help you make up your mind. If you find yourself sucked in like I did, a reasonable $.99 IAP will unlock the rest of the campaign content. Additional IAPs are available for those who want all the ship upgrades from the get-go. A Space Shooter For Free does a lot of different things, and juggles them very well. For the quality and quantity of shooter on display here, the value proposition is dynamite. For an initial price of free, I’d definitely encourage downloading and checking out this title.