Here’s a history lesson for you: way back in September of 2010, Parry Gripp (Internet celebrity and lead singer of Nerf Herder) chopped up a popular video of a cute animal persuasion and added his own soundtrack. Since then, Baby Monkey (Going Backwards On A Pig) has earwormed its way into brains some nine million times.

It’s been stuck in my head for two days straight, by the way. Help me.

YouTube is pretty good at monetizing memes already. Its Partner Program gives creators a cut of the ad revenue, and some folks have made good money that way. But now the App Store is where it’s at, and where there is money to be made, you can expect memes to follow. This isn’t the first time (there are a few Nyan Cat games out there, for instance), and it sure ain’t going to be the last.

But Baby Monkey (going backwards on a pig) [$0.99] has one thing over most meme-based games: it has the blessing of the original content creator, which means it’s the only game where you can legitimately listen to the insanely catchy Baby Monkey song over and over and over while you play. 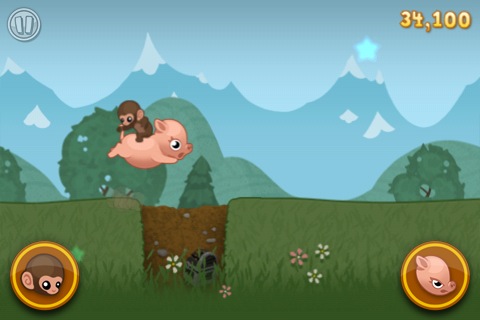 It’s also not a bad endless runner, much to my surprise. The usual money-making scheme for memes is that you slap one on a half-assed product, obsessive people buy it and everyone wins, but the people at Kihon Games have instead brought out a game that’s legitimately pretty fun. I wouldn’t recommend it if you’re the type to take your games very seriously, but for a casual gamer? Definitely.

It’s pretty self-explanatory. An adorable baby monkey rides backwards on an adorable, determined pig across an endless field. You control the monkey with a button on the left and the pig with a button on the right. You can jump them separately — the pig to leap onto higher ground and the monkey to grab floating bananas, or one after the other to reach the highest bananas. If the monkey’s on the pig when it hits an obstacle, everything comes to a screeching halt. 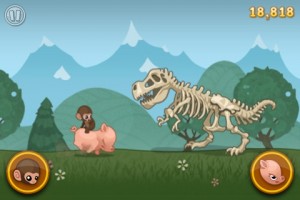 Managing the controls is a bit like rubbing your stomach while patting your head at first, but if you’ve played an endless runner before it’s really just a second button and an extra row of obstacles to keep track of. The real challenge lies in getting every banana, because missing a single one will drop your score multiplier back to zero.

When you get the hang of riding the pig well enough to build an impressive score for the Game Center leaderboards, you’ll probably run up against the game’s two big failings. The first is the lack of multitasking support, a feature that should really be a given by now. The second is that it’s all rather samey. There are different areas to run through, but the main distinction between them is which wacky obstacles are pulled out, whether it’s going to be Om Nom Hamsters or, um, manure piles.

But as a ridiculously cute time waster with a stupidly catchy soundtrack, Baby Monkey knows what it’s doing. Dynamically generated levels and a challenging difficulty curve will keep you entertained while you drive your friends insane playing the song on loop. The better you do, the longer you can abuse them. Sure, you could play without sound or with your own music…but why would you buy this game you were going to do that?