Last week, we took a look at the trailer for Hothead Games’ Kickin Momma [99¢/UHD], and left with the impression that it was pretty much Peggle [$2.99] with an added baby kicking element. After playing with the final product, I don’t think I could come up with a more apt description. Kickin Momma centers around a similar type of Pachinko-like ball-bouncing gameplay that PopCap’s title employs, and it does a great job at capturing the same kind of fun factor. It does add a few minor twists to the formula though, and finishes things off with its own brand of wackiness and top-notch production values.

The story follows a blue pear-shaped character named Momma, who has her sights set on an expensive jewel necklace. The problem is, she just can’t afford it. Not content to live without this prized possession, she solemnly lumbers over to the edge of a cliff, possibly to leap off and end her suffering from desire. Then, after kicking a rock over the edge, she discovers the canyon is littered with bright pegs and fantastic jewels just like the ones from her coveted necklace. Suddenly it hits her – she can take her babies and kick them one by one into the canyon to collect the jewels for her. Sounds like a logical solution to me! 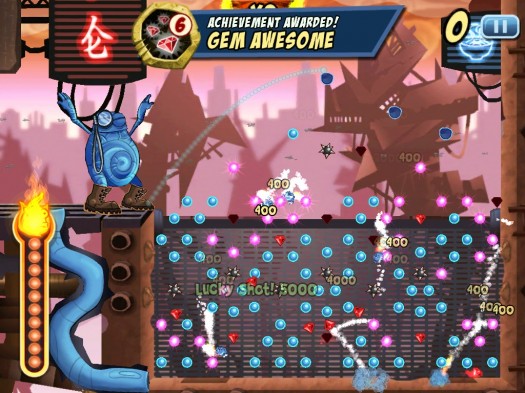 The absurdity of the premise for Kickin Momma is actually a large part of its appeal. It may sound horribly immoral, but before you run off calling Child Protective Services, keep in mind that Momma is a big ol’ alien (er, uh, something), and the children seem to rather enjoy their bouncy journey to the bottom of the canyon, and always come out unscathed. So, you know, everybody wins in this scenario. So relax, tee up a baby, and punt your way towards riches.

There are 36 levels in Kickin Momma spread out over 3 different worlds, with a spot for a 4th world hinted at for a future update. You begin a level from the left of the play field, where you will set the trajectory of your kick using a handy arrow guide. Touching and dragging will stretch and point the guide wherever you want it to go, and a set of arrows surrounding a “kick” button give you the ability to have more incremental movements if you need to be more precise. 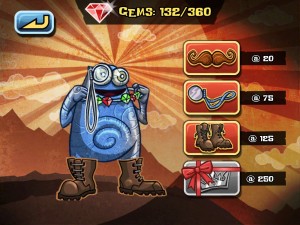 You start out with just a few children to kick, represented by the number in the upper left corner, but you can earn more as you play by scoring well on each turn. There are 10 red jewels in each level, and the main goal is always to knock them down from the play area to the ground where they are collected, with a minimum number needing to be collected to pass each level. Beyond that, you can also score big by triggering bonuses for lengthy bounces, hitting special blocks, or nailing enough pegs in a single turn to fill up an “on fire” type of meter. Your total score for each level will determine whether you earn a bronze, silver, or gold medal.

Kickin Momma’s gameplay is largely based around luck. You’ll aim your shot, kick a baby, and watch as it pinballs around the playing field, hopefully racking up enough points and jewels to advance to the next level. But, that doesn’t mean it’s completely devoid of strategy. You’re given a tiny window in the upper corner that gives you a close up view of your guide arrow’s tip. Success often lies in placing the guide at just the right position to bounce off a peg, nab a jewel you need, or earn some bonuses for a big score. It can take some good decision making and skill to collect enough jewels to pass a level, let alone earn a score good enough to net a gold medal.

As you progress, additional elements are added into the gameplay like different types of pegs, bombs, characters, and other items that keep things fresh. One of the highlights of Kickin Momma is the crazy art style and over-the-top effects that are constantly blasting all over the screen. Momma is known to bust crazy dance maneuvers while her babies are bouncing around, and typically her antics are pretty hilarious. You can also unlock several items to customize Momma with, like a mustache, boots, and a monocle. That’s right, Momma got a ‘stache. I told you this game is weird.

Depending on the your score in each turn, you are also treated to various fireworks, particle effects, and so much confetti you might think Rip Taylor was on the game design team. In general, this is what I like most about Kickin Momma. The gameplay isn’t the deepest, but it’s always fun, and who doesn’t love watching a ton of shiny effects bursting right before their eyes while a giant blue alien thing does the worm off to the side?

Kickin Momma comes with enough levels to keep you busy for some time, especially if you go back to earn a gold medal on each one. Plus, there’s Game Center achievements and leaderboards that increase the replay value even further. It comes in 2 flavors – a standard definition version designed for older devices, and a universal HD version for the iPad or Retina Display devices. If you enjoyed the somewhat crazy, random, arcade-style of Peggle’s gameplay, then you will likely enjoy Kickin Momma as well, just as players in our forums currently are.