Well, it seemed like this day would never come, but here we are. After being announced at last year’s E3, and missing several intended release windows, Square Enix’s highly tactical role-playing game Final Fantasy Tactics: The War of the Lions [$15.99] is now available for download for your iPhone or iPod touch.

For some backstory, the original Final Fantasy Tactics first launched on the PlayStation back in 1998 to critical acclaim. It marked the first time the Final Fantasy series branched out from its more traditional RPG style and ventured into the realm of highly tactical combat with an engaging storyline and RPG-like elements.

In 2007, the game was rereleased for the Sony PSP as Final Fantasy Tactics: The War of the Lions, and contained a number of improvements. These included new storyline cutscenes, graphical improvements, new characters and classes, local multiplayer, and more. Unfortunately, with all these new enhancements, some negative issues rose up as well, most notoriously a slowdown bug that made combat flow at a snail’s pace even compared to the nearly 10 year old original. For a game where you’re engaging in combat a whole lot, this was an unfortunate problem. 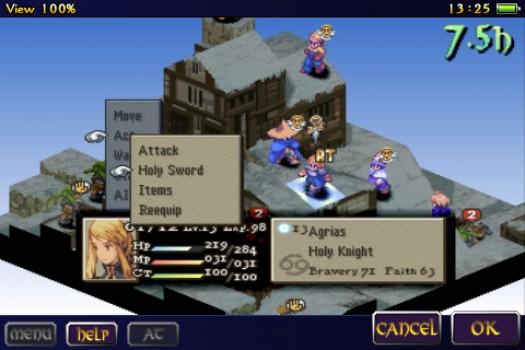 The iOS version of Final Fantasy Tactics is a port of the PSP version, and although it loses the local multiplayer mode, the slowdown problem has been greatly improved. The problem isn’t totally eradicated, but it’s at least much more tolerable now. Other iOS-specific enhancements include a completely native touch interface for navigating menus and combat and an autosave feature that allows for the types of interruptions that you get when gaming on a mobile platform like the iPhone. Some of the artwork has even been redrawn for this version, as well, though the graphics overall are still retro and pixelated, especially some of the in-game text.

The pricing for Final Fantasy Tactics has been a hot topic ever since it was announced. It’s certainly on the high end of the price tiers of the App Store, but in terms of gaming bang for your buck, it’s nearly incomparable to anything else available. There are easily over 100 hours of gameplay time here, so if you like your tactical strategy games to last a while then you’re in luck. An iPad native version is planned for release in about a month’s time, so if you figure you’ll be playing on your iPad mostly then it might be worth waiting around for that version.

Final Fantasy Tactics: The War of the Lions is an absolute classic, and it’s great to see a title of this caliber in the App Store. Some may not be down with the price, and if you’ve played the game extensively in the past it might be hard to justify buying the game again now. Of course, if you’re fanatical about this game like so many gamers are, then price isn’t even a question and chances are you’ve downloaded the game already.

You can check out further impressions of the game in our forums, and whether you’re a longtime fan or just now checking out the game for the first time, Final Fantasy Tactics: The War of the Lions is a fantastic tactical RPG experience that works incredibly well on the iOS platform.