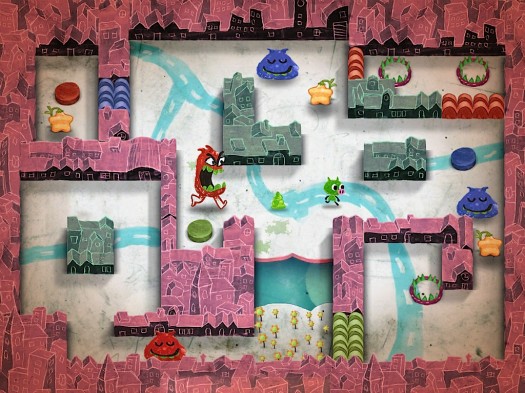 If you’d told me that an iOS game about a pig with seasonal allergies and the monsters that love to eat his boogers would top my list of most charming games on the platform, I’d have laughed in your face. Then I had a chance to get hands-on with Gesundheit! just a few days before its release. Whaddya know, mucus can be charming after all.

I’m not a big fan of gross-out humor, but that’s only a small part of what makes Gesundheit! stand out. For starters, it’s completely gorgeous. The hand-drawn art style you can see in the screenshots is consistent throughout every level, cutscene and map. The game also sounds fantastic. The music might just rival Bumpy Road for twee charm, and I mean that in the best possible way. 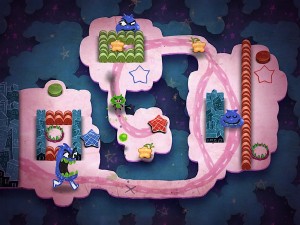 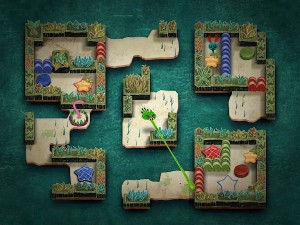 Of course the gameplay is really where it’s at. Gesundheit! is a top-down action puzzler. The goal is to lure all the booger-eating monsters into traps without getting caught — and if they see you, they’ll come for you. You move your hay-fever plagued pig around by tapping where you want to him go, and control his sneezes with a billiards-style pull and release. This launches a snot ball, which monsters just can’t resist. The whole thing seems super precise, which is helpful when you’re running for your little piggy life.

I’ve only had a chance to play a handful of levels, but the combination of game mechanics works very well so far. There are puzzle aspects, while you figure out how to get the monsters to the trap and how to collect all the starfruit on the way. You also need to be stealthy, keeping out of site of monsters, sneezing and darting quickly out of sight. And you’ll need good aim to bounce your snot-balls precisely where you want them. New elements, like teleportation pads and mosquito monsters, are introduced regularly to keep things tricky. I can’t wait to see the rest of it.

Gesundheit! has come nearly out of nowhere, being revealed by Konami behind closed doors just last week at San Diego Comic-Con. But it’s not exactly brand new. Back in 2008, Gesundheit! emerged at the Independent Games Festival as a student showcase finalist. It went pretty viral as a PC demo, but a full release never made it out the door. When Revolutionary Concepts started working with artist Matt Hammill, they found out about his pet project and collaborated with him to bring it to iOS. Looks like the results are worth the wait — this game feels right at home on a touch screen.

Gesundheit! will be released this Thursday for the introductory price of $0.99 on iPhone and iPod touch, and $1.99 on iPad (3rd gen devices and iOS 3.2 or higher). We’ll bring you a full review of this sneezerific charmer once it’s out. In the meantime you can join the anticipation in our discussion thread.