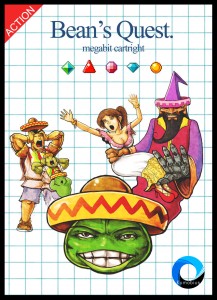 One thing that I love about the App Store is that there’s a lot about it that is highly reminiscent of the old 8-bit and 16-bit era of console gaming. Specifically, I’m talking about how seemingly everyone was just dying to make a character that could turn into a potential franchise, or better yet, a mascot for whatever console it might have been exclusively released on (for instance, Plok). There’s a ton of these seemingly B-grade character driven games on the App Store, and Bean of Bean’s Quest [$2.99] seems like a modern day Bubsy in that the protagonist has all the character it needs, however, will we ever be clamoring for another Bean game? I know I didn’t really care about Bubsy’s platforming career, that’s for sure. But, I digress.

Bean’s Quest is a strange beast. It’s one of the shortest iOS games I can think of that I’ve played recently. So short in fact, that it’s already over just about the time you start getting into it, which for most people will take around 5 minutes, but definitely no more than 10. Normally in a situation like this, I’d quickly move on to whatever other game I’ve got on my device and quickly forget about it until it gets deleted in my next mass-scale app purge. …But Bean’s Quest is good.

The graphics are perfectly vibrant, and have just enough of that 16-bit era pixely-ness to them without going overboard. The original soundtrack by Flashygoodness is an excellent pairing, and the controls work great: Touching one side of the screen causes you to move left, while the other causes you to move right. Since you’re a jumping bean, jumping is handled automatically, as in, you’re always jumping.

Initially this always jumping mechanic seems to be a mixture of irritating and unwieldily. I reluctantly bounced my way through the first level, jumping on enemies to kill them, collecting various diamonds, and even coming across a mysterious axolotl. It wasn’t until I bounced off the spring at the end of the level that things became clear- Bean’s Quest pumps a flat out silly amount of replay value by counting the number of jumps it took you to get to the end of the level, as well as whether or not you’ve collected all the diamonds along with the (sometimes hidden) axolotl. 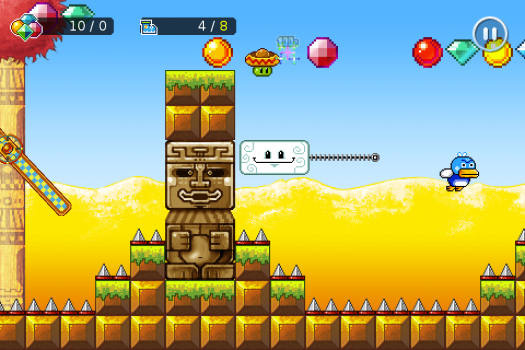 See, just bouncing around and cautiously going through the level resulted in me jumping 24 times. Bean’s Quest challenges me to do it in less than 15, and I can’t help but try. Hitting these jump goals involves some ridiculous levels of analysis of each of the levels, figuring out where you can jump, what to avoid, and what enemies you can bounce off of to potentially skip a obstacle that would take a few jumps to go over. Clearing each level with all the diamonds, the axolotl, and under par for jumps is going to be a serious challenge. I’m not even sure it’s possible, or at least, it seems beyond my ability.

What absolutely slays me about Bean’s Quest is how stupidly short it is. At the start of the eighth and final level I was really getting into the game, both focused on progression and going back and seeing how many jumps I could shave off once I got the gist of the level. But, just as quickly as I fell in love with the game it was over. 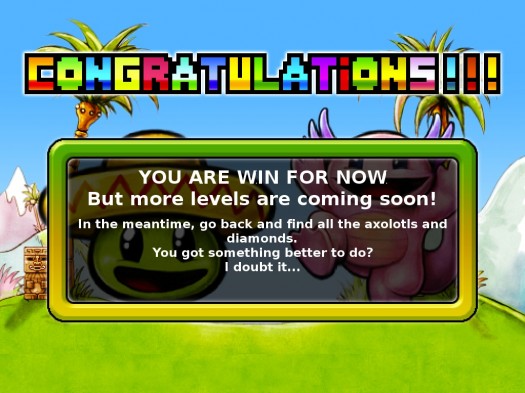 …Which brings me to the uncomfortable portion in this review where you find out whether or not Bean’s Quest is a game I’d recommend. In its current form, I definitely feel like I’ve gotten $2.99 worth of entertainment out of the game because aside from the content included, it’s an awesome package of graphics, sound, and undeniably sound gameplay. However, from a value perspective, Bean’s Quest is a hard pill to swallow considering games like Soosiz [$1.99], League of Evil [$1.99] and even Pizza Boy [$1.99] provide similar gameplay with much, much more content.

The good news is, there is light at the end of the Bean’s Quest tunnel. The developer’s web site mentions an impending update coming next month that will raise the level total up to 24 levels. Their blog even teases what the second world will look like– But waiting for updates, and specifically buying a game based on promised updates can be a dangerous game that all too often seems to end in disappointment.

If you’re willing to roll the dice on Bean’s Quest and the developers following through with their update plans, Bean’s Quest is an effortless recommendation. However, if you’ve already got an iOS device loaded with platformers you haven’t finished, it’s likely best to add this to your mental (or AppShopper) wish list until Bean’s Quest actually feels like a proper quest, and not a cruel tease of a potentially awesome platformer. With that being said, people who have taken the plunge on our forums are happy they did, and Bean’s Quest is even universal which always sweetens the deal.