Divine Robot’s Blobster [99¢ / HD] is a physics-platformer tasking you with stretching and flicking a blobbish creature across various levels in Blobtopia in order to thwart the evil polluting efforts of Blobzilla and the rest of the Big and Powerful Corporation. Along the way, you’ll need to collect gems and dodge evil blobs bent on getting in the way of your victory. The plot isn’t going to win any awards, but you get the point — it’s a platformer, not the next great American novel.

As far as the platforming is concerned, Blobster gets its controls and influences right. Control is handled by tapping the left or right side of the screen and slingshotting by touching and dragging a direction to jump. There is also a tilt control option if that’s more your thing. Across the game’s forty levels you’ll run into familiar platforming concepts, from springs and spikes to gears and shields, Blobster doesn’t exactly offer up any new ideas, but it executes its mechanics well. Besides simply traversing and surviving a level, you’ll also need to capture gems in order to unlock bonus levels. It also tosses in a few completely physics-based puzzle sections, including at least one level that’s clearly a nod to Angry Birds. 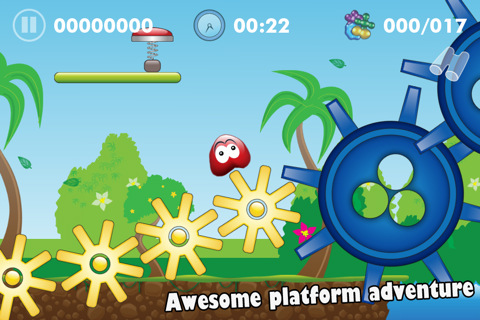 No matter how solid the mechanics and controls are, a solid platformer boils down to level design and Blobster manages to nail it most of the time. The majority of the early levels can be cranked through in under a minute or so, but they get progressively longer as the game goes on. For the most part, the difficulty curve keeps the game interesting throughout, but it also means it introduces and discards mechanics so quickly you’ll often find yourself wondering where your favorite power-up disappeared to. 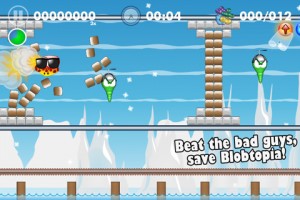 One of those mechanics is the life preserver, which lets you explore underwater. It essentially flips the game upside down because you’re continually floating to the top and you have to platform accordingly, hitting the underside of platforms instead of the top. It’s a nice twist to the gameplay and they could have probably built an entire game based on this concept alone. It’s also a bit off that at the start, the game seems to put importance on collecting plus-sign pieces to make Blobster grow and jump higher, but even though it seems like the core shtick, it comes and goes throughout the game.

What doesn’t go away is the collection system, where you’ll be picking up gems along the way to finishing each level. You’ll need to complete each section with a certain collection score to unlock bonus levels and raise your score on the leaderboards. As you’d expect, the collection part of the game is nearly a game unto itself and you’ll mostly be able to ignore or obsess over it depending on your disposition.  That said, if you snatch up 75 percent of the gems, you’ll unlock a survival mode that tasks you with staying alive and in the air as long as possible — a sort of Doodle Jump-alike that could have probably been its own thing in a different universe.

The easiest complaint to log against Blobster is the sound design. There isn’t any music in the game, which isn’t that big of a deal because you’ll have it on mute within ten seconds of the first level. I’m not sure what exactly they were thinking, but the sound that comes out of Blobster is something out of an educational ’80s DOS game and will drive you insane within seconds. Visually, Blobster animates and moves well, but despite the name and the bright colors, Blobtopia isn’t as interesting as it sounds. It’s not bad by any means, but it’s not going to turn heads based on aesthetics alone.

Thankfully, the gameplay sets the pace better than the sound or visuals and if you’re itching for a familiar but kitschy platformer, you’ll certainly find one here. Its biggest strength and weakness is in its diversity and although it’d be nice if it took a little more time with its more innovative mechanics, the fact most every level is wholly its own is a decent trade-off, even if it does feel like some great ideas get left behind.