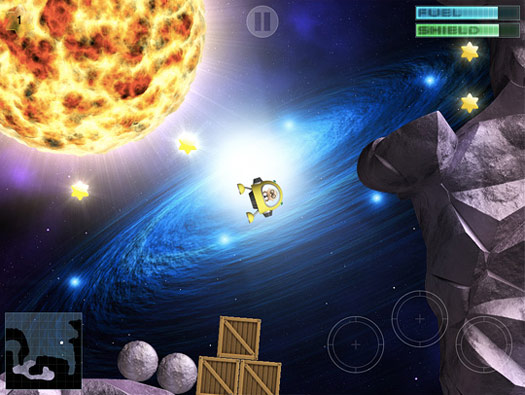 One of my very favorite games of the distant past is good ole’ Lunar Lander. There’s a certain beauty to the simple proposition there — it’s just gravity and you. Lunar Lander, which got its start back in 1969, kicked off the cave-flyer genre that boasts many great games under its banner. iOS developer Polygon Play recently offered us an exclusive look at their upcoming iPad title, Lander Hero, that will join those proud ranks later this year. 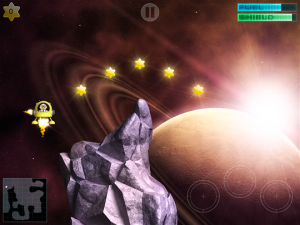 Lander Hero brings a twist on the standard formula by incorporating puzzle-solving elements into the cave-flyer experience. The goal of the game is to navigate each labyrinthine level, from start point to end pad, collecting stars as you go — you need to have grabbed at least 50% of the stars on any level in order to advance to the next.  Along the way, you will encounter a number of obstacles that must be negotiated. These include moving boulders, I-beams, (tip: flammable) crates, force fields, bombs and the like. For example, a certain pathway cannot be travelled until you nudge a boulder rolling along a beam until its weight tips it out of your way. In addition to these challenges, your ship’s fuel and damage levels are always working against you. Power-ups hidden about the caverns of each level must be found and collected to keep your ship in shape.

The game offers several different configurations of the on-screen touch controls, which are thrust-left, thrust-right, and thrust-down. In the beta build I’m playing with, clustered, one-hand controls are the default, but I find a two-handed button arrangement — thrust-left/right at the lower left, thrust-down at the lower right — much more to my liking. Having such simple controls, as cave-flyers often do, Lander Hero works just fine with the iPad’s touchscreen.

Lander Hero really shines in the graphics department. The stylized rocky landscapes are bright, colorfully textured, and slide by as smooth as glass on the iPad 2 as you guide your ship along the twists and turns of each cavern. The whole scene, along with your cartoony ship and the little bespectacled scientist inside (there’s apparently a backstory there), lend the game a whimsical feel. And the physics system, so critical in titles of the sort, is spot-on.

I’ve really enjoyed playing through the 13 finished levels in this beta, and am anxious to move through the rest of the 40+ levels (across two different worlds) that the initial App Store release will bring. The game is iPad-only, but the developer tells me he’s considering bringing it to the iPhone, down the road. I’ll be sure to let all the cave-flyer fans out there know when Lander Hero hits the App Store, sometime in late September.