If you’ve ever played Spectromancer on PC, you know what you’re getting into with Hothead Games’ Kard Combat [Free, with in-app unlockables]. Not because it’s been ripped off, mind you, but because the co-creator of Kard Combat is Richard Garfield, the man behind Spectromancer and the big daddy of TCGs, Magic: The Gathering.

The thing that sets Kard Combat and its progenitor apart from other card games is the complete lack of deck building. For some, building a carefully constructed deck designed to devastate your opponents is what the genre is all about, but I find it more of a necessary evil. I don’t particularly want to spend all my money buying boosters, or spend hours agonizing over whether this card or that card is a better fit for my deck. If you feel the same, you’ll find a lot to like here.

For starters, Kard Combat completely eschews the booster pack model. Instead, you earn your cards in the game’s substantial single-player mode. There are four mages to take through the campaign, The Tower, each defined by an affinity: Death, Holy, Dominator and Machine. Whichever one you choose, your cards will be randomly chosen from four elements, Fire, Water, Air and Wind, and a fifth that matches your affinity. Each match, your deck is built out of twenty randomly chosen cards picked from those you’ve unlocked and spread evenly between the five categories. 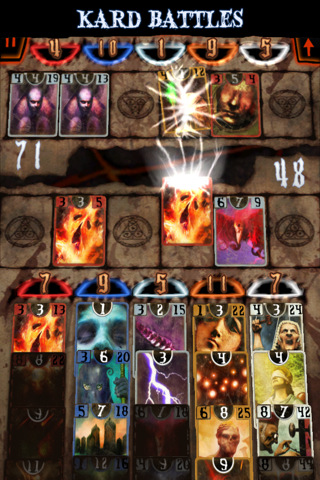 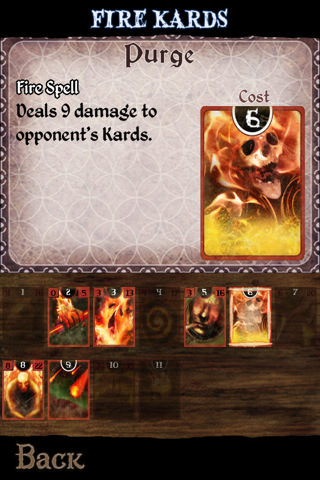 When you face off against an opponent, you each get a field with six positions to fill. On your turn, you can play one card, which is either a unit that can be placed in one of those six positions, or a spell that affects you, your opponent or his cards directly. Units face off against the cards placed directly across from them. Each card has a mana cost, and you have a pool of mana for each category of card – this mana starts out at random levels and increases by one point each round, barring any cards that modify your mana growth. Both players have a pool of health, and the loser is the one that runs out of health first.

There are two ways to unlock cards. You can play through the Tower, which is free for the first few levels and can be opened up with a $0.99 in-app purchase for each mage (or $2.99 for all four). Each opponent you defeat on your way up the tower gives you a new card or an item. If you’d rather just hop straight into multiplayer fully armed, you can unlock all the cards, mages and items with a one-time purchase of $9.99.

Kard Combat has asynchronous multiplayer through OpenFeint. Strictly speaking, this means you can walk away and take your turns whenever you want to, but most of the community seems to play as though this is a synchronous game. There’s nothing to stop you from playing in real time, and with such a fast, strategic game, you’ll probably prefer it that way.

That’s a lot of technical stuff, but the technical stuff is pretty important here. You know what else is important? The art. The card art in Kard Combat is pretty great, in a moody, gothic sort of way. Unfortunately Hothead has chosen to only let you see it in tiny little boxes to keep the game’s file size low. Since the game’s interface isn’t much to speak of (it’s functional, but with an unpleasant 90s-retro-gothic style), and the art is so small, the whole thing is a bit bland to look at. The sound design is also underwhelming, leaving us with a somewhat uninspiring package.

But looks aren’t everything, and thankfully Kard Combat makes up for its weak points with a great personality. It’s a fun game, and the lack of deck-building means it’s easy to get into — even for card game newbies. The single-player campaign has three difficulty modes, so you should be able to find a challenge no matter your skill level, and the multiplayer is both functional and well-balanced. Our forum users are pretty into it, too. Kard Combat has a bright future ahead of it, and Hothead Games has given every indication the plan to keep it growing for a long time to come.