Back in May, Simogo Games released Bumpy Road [$2.99], a title that was a mixture of endless runner and time trial gameplay with a whimsical art style and incredibly unique controls. I gushed about how much I enjoyed Bumpy Road in our review, and last month the game was improved further when Simogo released the first major update which added 2 new Sunday Trip time trial modes and a few other new gameplay features.

Now the 2nd major update to Bumpy Road is getting set to hit the App Store, and after giving some love to the Sunday Trip portion of the game last time, this latest update adds an entirely new endless level to Evergreen Ride. The original Evergreen Ride level has been subtitled Spring, and the new level is subtitled Autumn. It’s a fitting name too, as Autumn Evergreen Ride features new background environments and a color palette that reflects that season. 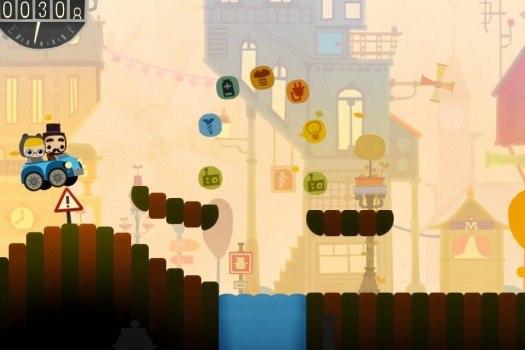 The changes aren’t just visual though. Evergreen Ride Autumn contains 220 new level segments as well as 3 new types of platforms. There are elevator platforms that move vertically up and down, “flip” platforms that are constantly disappearing and reappearing, and conveyor belt platforms that will propel your car forward when you’re riding on them. Simogo has given me a preview version of the Bumpy Road 2.0 update, and I’m really digging how all of the new elements in Evergreen Ride Autumn mix up the normal gameplay.

Much in the same way that the previous update’s “brake gizmo” really changed up how you would play Sunday Trip, these new platforms take how you might normally play Evergreen Ride and turns it on its ear. Your speed, timing, and screen location are all much more important now. For example, you may have to stay closer to the right side of the screen in order to get on an elevator platform so that it lifts you up at the right time to hit a set of gizmos placed high in the air. I normally try to stay close to the left side of the screen to give myself the most amount of time to react to what’s coming, but with these new platforms that move that’s no longer the best tactic.

The video below does a great job at showing off all of the new elements in Evergreen Ride Autumn, and some of the new strategies you’ll need to utilize to be successful:

I really have adored Bumpy Road ever since its release, and the last update did a great job at adding interesting new gameplay elements while retaining the core feel of the game. This newest update is no different, and even feels more substantial than the last. The Bumpy Road 2.0 update is currently working its way through the Apple approval process, and Simogo hopes to have it release before the month is over. Make sure to pop into our forums and let everyone know what you think about Bumpy Road, and we’ll let you know when the 2.0 update becomes available.

As an aside, Simogo’s first iOS game Kosmo Spin [Link] is currently free to celebrate the 1 year anniversary of the company’s inception. It contains a similar type of quirky art style and gameplay as Bumpy Road, and is definitely worth grabbing while free.