Ant Raid [$2.99] isn’t a knockoff of Nintendo’s Pikmin. I want to get that out of the way up front. It has a few things in common with Pikmin, sure, and it does a pretty good job of scratching that itch while Nintendo takes its sweet time bringing out the next sequel, but the game stands well on its own.

So now that we’ve covered what Ant Raid isn’t, I probably ought to tell you what it is: a real-time strategy game that forgoes micromanagement for simple tap-and-target style gameplay. Your units are the titular ants, who circle around your base. Tap and hold to select a group of them, and then tap a target to send them off after it. Sometimes that target is a resource like pine needles or berries, other times it’s an enemy — a mutated snail or bee that’s coming to destroy your base. Once they dispatch their foes or gather their resources the ants return to base, ready for new orders.

The controls keep the targeting system simple, but Ant Raid also requires some strategy. Enemy units come in three colors, and each gives you energy toward special abilities. When you gather enough blue energy, you can make your ants immortal for a time. Red makes them super fast, and if you can trigger red and blue at the same time, you get gold ants that are both speedy and immortal. Green energy is a special case – it unleashes divine power, letting you interfere directly by tapping on enemy units to smite them and dragging resources to the base to gather them. A large part of the game’s challenge lies in deciding when to unleash these powers, and in maintaining enough energy to keep them going. 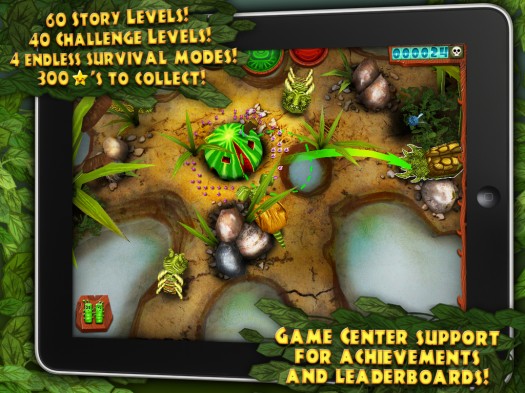 Without any serious resource management or unit building, Ant Raid runs the risk of being a smidge too casual, but despite the lack of any hardcore RTS features it manages to stay challenging. Keeping your ants alive is goal number one. Each enemy has its own pattern of ant-murder: snails knock out all attacking ants when they die, while beetles flip on top of ants and need a second wave of attackers to polish them off. You’ll need to keep enough ants alive to revive their fellows and take out the enemy. With large swarms constantly rushing your base, you need to think on your fingertips to ensure all the enemies are engaged but none have a chance of obliterating your army. If you can’t move quickly, your base will get slammed.

These skills will be put to the test across Ant Raid’s 104 levels. Story mode takes up the first 60 of those levels, and faces you with the task of curing the vicious insects of their pesticide-induced mania. Once you complete story mode, you unlock 40 challenge levels across 4 levels of difficulty. You can replay all of the levels to try to get 3-star rankings. There are also 4 endless survival levels that unlock as you progress through story mode. These have a clever twist: the number of ants you have available in each of them corresponds to the number of stars you earn in story mode.

Aside from a less-than-inspiring story and mediocre cutscene design, I like nearly everything Ant Raid offers up. The game benefits from being built specifically for iPad, and takes advantage of the screen real estate. The levels look great, the controls are solid and very rarely frustrating, and there is a ton of content (including 47 Game Center achievements and 5 leaderboards). Some of the goals in later story mode levels get repetitive – build flags in every level, then collect berries, then build flags, then collect berries – but the ramped-up difficulty kept me interested despite the repetition.

Ant Raid might be a little light for the serious RTS crowd — its focus is on frantic action far more than management or organization. For anyone who wants some strategy in their action games, though, it’s a perfect fit.