Adding color to a black and white world isn’t exactly a new concept in games, but Kaia Games’ Color Bandits [99¢ / HD] attempts to add that layer to a side scrolling shooter with a resemblance to Contra in terms of gameplay, but not in challenge.

As far as story and setting is concerned, Color Bandits keeps it as simple as possible. An evil steam punk boss has stolen color from the world and you, a cat with a gun, needs to reintroduce color by blowing up robots. To do so, you’ll travel across six different stages each broken up into three different levels, but the levels aren’t levels in a traditional sense, they’re just checkpoints scattered throughout each linear stage. 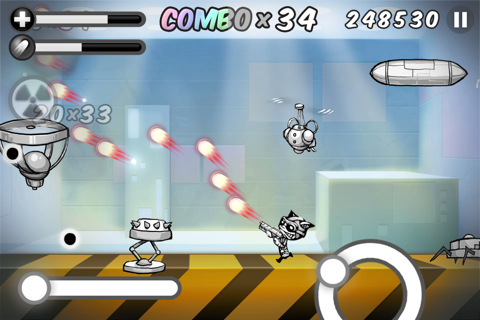 Control wise, you control the forward and reverse of you character with a slider on the left and the shooting direction with a right analog stick. The screen moves automatically to push you toward the right.

From there, enemies pop up and attack you in a wide variety of ways. For the most part, you’ll spend your time dodging and shooting and for the bulk of the game, it’s not a difficult affair. You can shoot somewhat randomly and you’ll usually survive the onslaught. By the last couple of levels, you’ll feel an actual challenge coming up, but it ends up being a little too late. Along the way, you’ll get weapon power-ups, but you only get a small portion of bullets and most of the weapons feel similar to one another.

You can cruise through the main campaign in under an hour, but getting three stars on each level is a lot more complicated. The combo system is a bit unusual in that you rack up combos by shooting enemies, but the second one dies, the combo meter starts counting down. You don’t lose the whole combo if you miss a shot, but it counts down quickly enough you’ll get frustrated more enemies aren’t the screen. By stringing together the combo kills you’ll multiply the score of each kill and the higher the score, the more stars you’ll get at the end of the level. 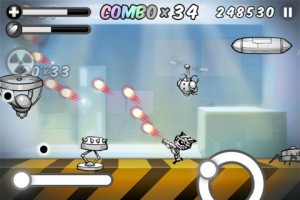 Once you get about halfway through, you’ll unlock a survival mode, which is the same core game but the screen doesn’t move to the right. The mode is all about high scores, which can be shared and compared on Crystal and Game Center.

Visually, Color Bandits has a hand-drawn aesthetic to it. The character and enemy designs look great and are tinged with a steam punk aesthetic without being overwhelming. As you improve your score and get more stars, the background starts to fill in with color. While they’re relatively static, the backgrounds are well done and the transition from black and white into color is subtle, but works well.

The foundation of Color Bandits is a casual take on a Contra-style shooter but since you can’t jump, the game can’t ever get as complicated as Contra. It tries to make it up by bombarded you with enemies in the end, but it’s going to be too little too late for a lot of players. That said, Color Bandits might be a better high-score game than it is a shooter.

Even looking at Color Bandits as just a high-score game, it’s hard for it not to feel stale toward the end. The experience doesn’t change throughout the levels, which for a game this short isn’t necessarily a big deal, but it would have been nice if things were mixed up a little throughout. Even still, the high-score nature of the experience makes it an enjoyable experience for anyone who has that part of their brain take over when a score is in place. The controls are precise and work terrifically, even if the campaign isn’t particularly amazing, the survival mode is well executed.