War Grimoire [$1.99 / HD] is a tower defense title with the trappings of a great genre-based game, but its execution of fundamental elements and basic design are holding it back.

Instead of lingering on the bad, I’ll note what drew our all-seeing eye to the project in the first place: its visual flair.

War Grimoire‘s world is a vibrant one, enriched by traditional fantasy and Japanese comics and cartoon tropes. In this genre in particular, it’s unusual to see a well-budgeted game shoot for something outside of space marines, bugs, and ravaged worlds.

Character has a place, too. Instead of traditional towers, soldiers of all builds — including archers, mages, and dragons — are the pillars of defense. While it does default to dull monsters, there are some creative enemies that end up attacking your armies in ways I’ve never seen in a tower defense title before. 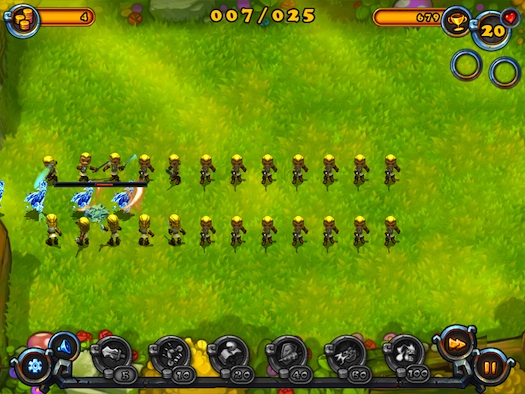 One of the more remarkable aspects is tower placement. Most levels allow you free reign with placement. It’s like the wild west of tower defense titles in this regard. Enemies pile in from all over the place, and you’ve got to be wise with your limited resources, but near infinite placement of long-distance soldiers and close-up fighters.

I also want to make note of the RPG tie-in. As in most tower defense games, you can upgrade your ‘towers’ while a level progresses. In this, however, you can take it a step further by upgrading individual class weapons and skill trees with points earned from the battles you’ve won, or hey, even lost.

In the pre-release images for War Grimoire, we saw massive battles: huge numbers of enemies and soldiers smacking each other in a centralized area. It looked chaotic, but in the fun, manageable sort of way. There was reason to the placement, at least.

Disorganized chaos is the tip of the iceberg in a title otherwise riddled with much smaller design issues. The UI is needlessly heavy, games don’t always save properly, the English translation is terrible, and in general, success is measured by trial-and-error.

I’d love to see this game patched with a couple of updates. It has a bright future if the core is tweaked and massaged.