Ever since we posted the first trailer for 1-bit Ninja [$1.99] from developer Kode 80 I’ve been anxious to get my hands on the title, and after a small delay past its intended release date it’s now available in the App Store. 1-bit Ninja is a platforming game that’s an homage to the classic handheld gaming systems of the 80s, but with a modern technical twist. At any point in the game you can tilt the perspective, exposing the previously flat 2D terrain as a 3D environment à la Paper Mario. It’s a neat effect, but also one that impacts the gameplay as it allows you to discover hidden aspects of a level, which makes for one of the most unique platforming experiences in the App Store.

The first thing to notice about 1-bit Ninja is that it completely nails the retro look and feel that it was going for. The game looks like it could have launched right beside Super Mario Land on the Game Boy two decades ago and would have fit right in. Despite the simplistic, blocky pixel graphics, there still manages to be a ton of character and style in 1-bit Ninja’s visuals. Those without a fondness for the handheld gaming graphics of yesteryear may not be so impressed, but for the rest of us the look of 1-bit Ninja should bring back memories of the good ol’ days. 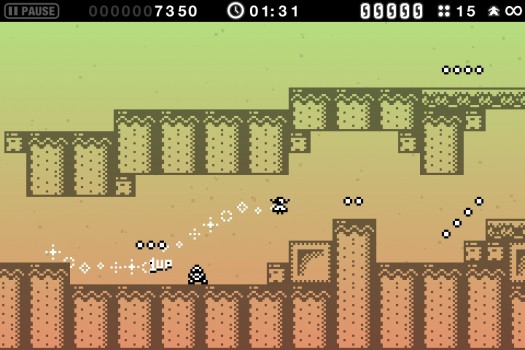 Of course, it’s easy to get snapped out of that retro nostalgia haze once you shift the perspective to 3D. Touching either of the upper corners of the screen will swing the camera around and give you a look farther down the level either ahead or behind you. The effect is quite awesome, and still impresses me each time I see it. Beyond just looking cool, it also serves a critical function: checking certain parts of a level in 3D will expose hidden paths and secrets which are integral to completing every goal in a level.

There are 20 levels across 4 worlds in 1-bit Ninja, and just completing a level will unlock the next one. This is easier said than done, though, as each level is fairly lengthy and can be quite difficult to complete. You’re given 2 minutes to finish a level, and there are coins to collect and enemies to kill along the way which will add to your score. Each level also has 5 bonus coins to seek out and collect, some of which can be very tricky to get to. Going back to discover these bonus coins and shooting for better times and high scores give the levels in 1-bit Ninja a ton of replay value, though unfortunately there’s no online component for me to see how I stack up against my friends. 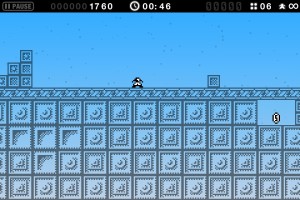 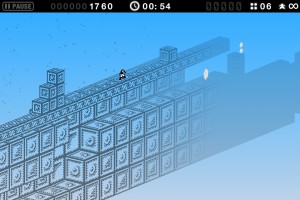 I was worried that constantly checking everything in 3D for secrets would slow down the pace of the game, and in fact, it kind of does. But that’s all part of the grand scheme of things in 1-bit Ninja. The game is really designed for two different types of play. One has you taking your time and exploring every nook and cranny for secrets and bonus coins, while at the same time learning the layout of a level. Once you’ve played a level enough to know what the optimal route is, then you can go for the perfect speed run. It works out incredibly well, and I’ve had a great time replaying levels over and over again trying to master them.

One of the radical design choices in 1-bit Ninja is the controls. Kode 80 has boiled the controls down to just two buttons, one that moves you forward and one that jumps. The inability to move your character freely back and forth completely changes how you play the game. If you miss collecting a coin or taking the path you wanted you aren’t able to go back and correct your mistake. You’ll just need to file that information away for consideration in a future run through of the level. To me, this makes for an interesting twist on a traditional platforming game, and I appreciate the different strategy that is needed in order to be successful. But for people who are just interested in having a new Mario-like game, you might never warm up to the idea of only moving in one direction.

If you can approach 1-bit Ninja with the right expectations, it’s easily one of the most enjoyable platformers in the App Store. The retro visuals are a delight and the 3D camera shift effect adds a super unique element to the game. The control style does take some getting used to, but after about 15 or 20 minutes with the game I had the hang of things and haven’t had a problem since. Opinions are pretty split in our forums, with some loving the unique twist on platforming and others unable to accept the limited movement.

Personally, I’m completely hooked on 1-bit Ninja, and if you think you’re able to accept some of the design decisions in the game and you’re a fan of its retro aesthetics, then I’d definitely recommend checking it out.