The general rule of thumb for cooking chicken is that you want to cook it slowly so it retains its juices and doesn’t dry out too quickly. It’s a delicate balance to ensure you don’t walk away with food poisoning, but if you get it just right, you’ll have a tasty treat. The same goes for most puzzle games and AQSystem‘s Toast the Chicken [99¢] is at first a slow burn, but as the difficulty ramps up it becomes clear it’s an original concept that doesn’t play like much else before it.

The goal of each of the 50 stages is to set the chickens in the room on fire. To do so, you’ll be swiping the screen to move a scientist around and tapping an area to set a fire. Each fire you set will spread every time you move across a grid or wait out a turn. As any smart chicken or human would be wont to do, they’ll move away from the fire as it gets closer, meaning a bulk of the game is spend figuring out how to corner the chickens and protect the scientists at the same time. Game over comes from your death, or the death of the other scientists sometimes spread around the levels. 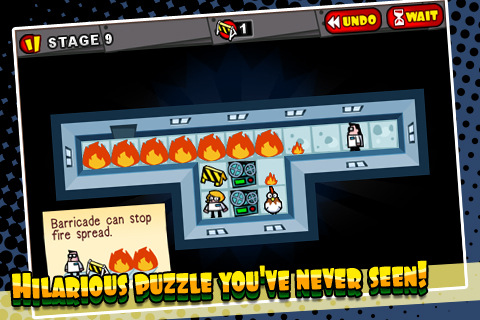 Toast the Chicken does a good job of introducing its elements into the mix slowly as the levels progress. Every ten or so levels a new element is introduced and you’ll be able to move boxes, drop oil, set up obstacles and even use a Molotov cocktail.

You’ll be doing all this on a wide arrangement of level sizes. One particularly difficult level toward the end is only sixteen blocks and requires perfect timing, whereas others are much larger and more spatially oriented, with roadblocks getting in the way of fires or boxes needing to be moved to ensure both your safety and the chicken’s death. Like any puzzle game, everyone is going to have a different experience, but the diversity in puzzle type ensures that most people are going to struggle at least a few times.

Thankfully, there is an “undo" function if you mess up. As things start to get exponentially complicated as you move along, you’ll be managing several fires at once all while trying to time everything so your fellow scientists don’t get set on fire before the chickens. You can undo as many turns as you need to without affecting your final score, which gets a medal award by the end, and you can compare to other players on Game Center or OpenFeint.

Of course, the “undo" function being a necessity also sheds light on the level design’s occasional hiccups. On the later levels you’ll feel more like you’re getting through based on trial-and-error instead of a carefully laid out plan, but considering the game would be near impossible without being able to undo mistakes, it’s a necessary evil in this case. Even still, it would be nice to be able to skip levels when one is proving especially difficult.

Visually, Toast the Chicken gets the job done with cute, cartoon graphics that bring to mind early Cartoon Network style art. The music matches the style, but considering it’s essentially one song looped over 50 different levels, chances are you’ll be muting it relatively quickly. Aesthetically, the stages don’t change much as you go along, but since you end up toasting an entire level by the end, it doesn’t make much of a difference.

Toast the Chicken is a new experience for puzzle game aficionados. The closest thing it resembles is something like Boxed In and in that same way it’s more original than it might seem by just glancing at the screenshots. It might have the look of just another casual puzzle game, but the level design is clearly geared toward people who don’t mind losing more often than not. It cooks slowly and once it ramps up toward the end, it’s a diabolical, thoroughly enjoyable puzzler.