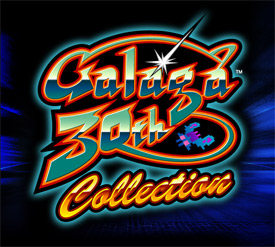 On July 23, 1981, Galaga, one of the most well-loved scrolling shooters of all time, made its arcade debut. In celebration of its coming 30-year anniversary, Namco has released the Galaga 30th Collection [App Store], which brings Galaxian, Galaga, Gaplus (aka Galaga 3), and Galaga ’88 to iOS.

The collection is a free Universal download (for iPhone and iPad) that includes Galaxian (which is actually the first game in the Galaga series) and offers the other aforementioned titles as in-app purchases individually ($9.97 combined) or as a discounted single game-pack download at a price of $7.99. Each of the titles features reworked graphics that lend a more modern feel to the retro and an optional scan-line filter and score-tracking HUD.

There’s not a whole lot to say about the gameplay that hasn’t been said for the past 30 years. These are all highly enjoyable and well-loved shooters that feature excellent balance and white-knuckle action. The iOS adaptations of these games, of course, feature iOS-style controls, and of several sorts. There is a mode with two left / right sliders at the bottom of the screen, one for movement and one for movement plus autofire; a left / right slider mode with a tap to the game screen to fire, and a control mode featuring a left / right virtual stick and a fire button along the bottom. The virtual stick mode moves your ship at a speed similar to the arcade originals, while the slider modes move your ship as fast as your finger can zip back and forth across the screen. 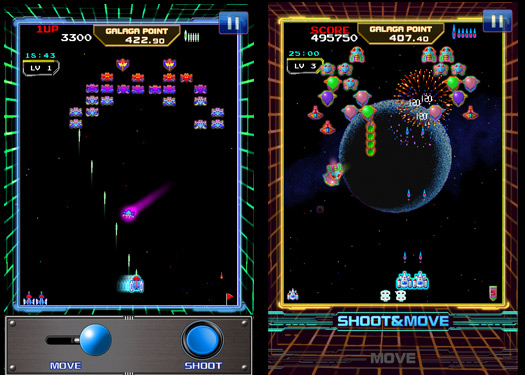 An accumulating / depleting fast-fire battery has been added to the games in the collection, which heighten the pace of the game. It’s an addition that actually feels pretty nice. I warmed up to it quickly.

Galaga, Gaplus and Galaga ’88 all feature a Score Attack mode that is a race against the clock to see how high a score you can achieve, in addition to the Normal Game mode. Another enhancement found in the iOS ports is the ability to supercharge your ship by buying upgrades with Galaga Points earned as you play. All of the titles in the collection feature Game Center achievements and rankings.

Galaga 30th Collection includes a pretty epic intro movie sequence that will have longtime fans smiling, but sadly it adds some real bulk to the download, which weighs in at a hefty 135MB.

The star of this collection is definitely the highly acclaimed Galaga ’88, but none of the games in the Galaga series disappoint in the least — in the arcade or under iOS. The touch control options presented here are some of the best I’ve seen for an iOS arcade conversion, and Galaga 30th Collection really is worth a spot on any arcade shooter fan’s iOS device.