Feed Me Oil [99¢ / HD], from Chillingo and HolyWater Games, is a game about petroleum. Oil, that is. Black gold. Texas-tea. Bubbling crude. Your role is to guide the expensive black liquid from the broken pipe to the designated area, to clear each level.

Liquids are difficult to render realistically, so I wondered how well the oil effect would be delivered on-screen. And I wasn’t disappointed. The oil looks and sounds like a thick, gooey, black substance, either flowing as a stream or breaking into separate globs. The oil is the main character of this title and it’s depicted well. While there’s other physics-based games out there, the gushing oil effects make this one particularly interesting. The rest of the graphics appear to be heavily influenced by the popular World of Goo, which features similar large-eyed cartoon creatures, shown in profile. 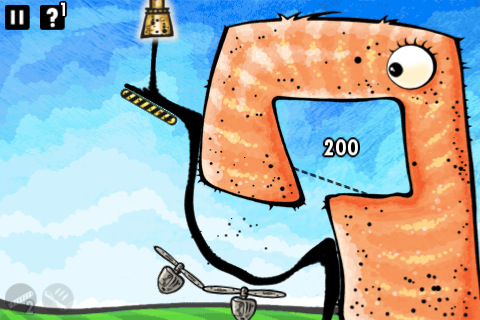 To control the oil, you place objects such as rotating platforms, fans, wind, windmills or oil-magnets in its path. Each of these objects pushes or pulls the oil in a different manner, such as flinging it across the screen. Scores are based on the number of objects used to help the oil reach its destination (three stars per level). In most cases, there’s no single solution, since you can position objects in any order or location, even on top of each other. However, a hints system is available. Each hint causes a 30-second delay before the next hint can be utilized on that level. Alternatively you can pay to have all hints unlocked immediately, as an optional in-app purchase, although most players won’t need to bother.

The gameplay and controls closely resemble Enigmo. You select one of the available objects, then touch the screen to position it. Each object can be rotated and some can be set to turn clockwise or anti-clockwise. A double tap deletes the object. Once you’re ready, you touch the oil pipe and watch the sloppy black goop flow, often in the wrong direction via an unforeseen leak, but hopefully towards your target. 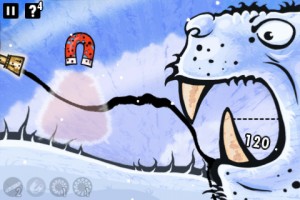 The next step involves multiple adjustments and corrections. This game requires trial and error, which is reminiscent of games like Cat Physics from Donut Games, which similarly involves setting objects in place, then adjusting and tweaking them until you’re successful. Sometimes the slightest movement of one object can make the difference between level completion or watching your precious oil supply disappear off-screen. The controls in Feed Me Oil work well for making quick and frequent adjustments, then re-testing.

Feed Me Oil includes 49 levels. This includes three chapters, with fifteen levels per chapter. Each chapter is initially locked, until the previous chapter is completed. Four bonus levels are unlocked once 50, 90 and 130 stars are obtained or if you gift the game via the Crystal network. The bonus levels differ slightly from normal levels, but i’ll leave that for you to discover yourself and of course, the developers have mentioned that more levels are coming soon. Chillingo has integrated their own social gaming network solution, Crystal, for 31 achievements and high scores which also piggybacks on top of Game Center like most of their recent games. Separate leader-boards exist for each chapter and for the bonus levels.

While the graphics and gameplay are successful, some of the music falls short. The music-box soundtrack became so irritating that I deployed the mute option. Another track is a few bars long and loops repetitively. Fortunately there’s a few different sound tracks, some of which are relaxing and enjoyable, and better suited to the oily gameplay.

Overall, this game is definitely fun and it’s always satisfying to watch your black oil slurp its way into the mouth of a strange, big-eyed, oil-craving cartoon land-creature. Hopefully they deliver on the additional levels, but any game that mixes elements from Enigmo, World of Goo and Cat Physics is sure to do well.