The last time I discussed the Back to the Future series, I noted that I’ve hit a creative wall of sorts in terms of coverage. The initial two episodes hit all the same notes that the third episode does, so it’s hard to find something meaningful and fun to share. Of course, I’m also couching this in the opinion that every episode is well produced and their respective new, or even reproduced, mechanics are sharp and solid.

If you missed out on the first episode [Free] though, now is the time to grab it. It’s free on the App Store until June 31, 2011. You have the entire month to push “download” and grab what is, easily, one of the coolest modern adventure games out there. 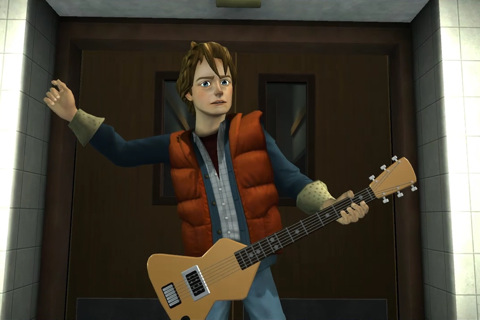 If the fact that it’s free isn’t enough to convince you to give it a download, go ahead and check out our review for it. Overall, it’s an ambitious beginning to a serial that treats its source material with the proper reverence. It might lean on a more casual-level of skill, but it’s still fun to play.

In other Back to the Future news, Episode 4 [$6.99] is now out on the App Store. We will, of course, continue our coverage of the series so look forward to our impressions down the road. Now, push “download” already. Jeesh.

UPDATE: For whatever reason, the first episode of Back to the Future is now back at $6.99. The press releases all mention that the game will be free until July 31st, so they might have potentially jumped the gun on setting it free. Either way, we’re trying to get to the bottom of things.