I’ve played a lot of brick breakers, and whenever one claims to reinvent the genre I cringe a little bit. Usually it means they’ve added crazy paddles or rotation mechanics that turn the game into something totally different. All I want is a really awesome modern take on the Breakout formula. Is that so much to ask?

Apparently not, because that’s exactly what Anodia [$0.99] gives us. Functionally, it’s a standard brick breaker, with one paddle at the bottom, some bricks to break on top, and a ball that bounces between them. The pickups that drop from broken bricks can enhance your game, making your paddle faster, giving you extra balls, and so on. They can also punish you, with handicaps like a stunned or shrunk paddle. All fairly typical stuff. Aesthetically, though, this game is anything but typical. 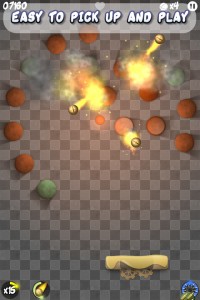 The “bricks," in this case, can be almost anything. You’ll be bouncing your ball at light bulbs, flowers, and beautiful geometric shapes, many of which move and sway with realistic physics. This can lead to some confusion—sometimes you can’t really tell how much damage you’ve done unless you can spare a glance at the brick’s health meter at the top of the screen—but it’s worth it. Each level is a new surprise to look at and play with.

The main campaign has 48 levels across 8 themes, like “Colors" and “Geometry," and there’s a mini-campaign with 5 extra levels. In campaign mode, you’re working toward an overall high score for completing all the levels. You start with 5 lives, and you can buy 5 more with 20,000 of your hard-earned points.  Your overall score and best level scores are ranked on Game Center leaderboards. You also get graded with stars on your performance each level, and you can go back to improve your grade in Quick Play mode.

I should mention one powerup that makes Anodia a lot less frustrating than some other brick breakers – the Gravity Field. It’s a freebie that you can activate at any time by tapping the screen. Balls will be pulled toward the spot you’ve tapped, making it much easier to hit the last few bricks in a level. Once you’ve used it you’ll need to let it recharge, but the recharge time goes down as you approach the end of each level. It’s a little touch, but it keeps things moving.

You can choose between tilt and touch controls, and they’re both fairly good choices—with slight downsides. With touch controls, the paddle feels a bit too slow. It’s no faster in tilt mode, but without your finger speeding ahead you won’t notice as much. Tilt mode doesn’t feel quite as precise as touch, though. You might want to experiment a little to see what feels best.

There’s only one serious problem with Anodia: it has no music. Since you can’t listen to iPod music while playing, you have the choice of silence or the sound effects alone. There’s a toggle for music volume, so I’m hoping to see an update that brings it in eventually. Feel free to chime in with other ideas in the forum thread. I’d also love to see some more color. While Anodia’s levels are beautiful, most of them rely on a very muted color palette. Some later levels are filled with color, and it just brings the game to life.

Neither of those things is keeping me from putting a lot of time into Anodia. With star ratings to earn on each level and 32 Game Center achievements, there’s plenty to do. As a Universal release with Retina support, Anodia looks lovely on any device. I’m not sure it actually reinvents the brick breaker, but it’s certainly an exciting and beautiful example of the genre.