Confession time: some games are so adorable I just can’t resist them. Storm in a Teacup ($2.99) is one of those games – I saw the screenshots and I knew it had to be mine. Based on the reaction in our forums, I’m not alone. Luckily the game largely lives up to its first impressions.

Yes, Storm in a Teacup is completely adorable. But it’s also a great little platformer. In it, you control Storm, a little boy riding a teacup through an imaginary world created by his brother, Cloud. Using on-screen controls, you move him around the game world by flying in short bursts. You can’t get far without running out of boosting power, so you’ll need to time jumps carefully to get where you’re going. You’ll also need to solve simple physics puzzles as you work your way through. 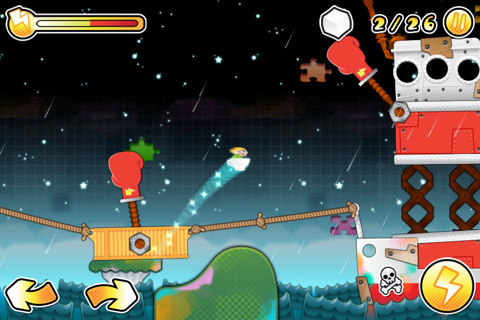 My biggest fear going into this game was that the on-screen controls wouldn’t work out, but I found them quite responsive. It took a while to get the rhythm of flight down – one full press of the boost button won’t always get you where you want to go, so you need to learn to tap it to extend your flight time – but otherwise the controls always worked well.

Thank goodness for that, because you’ll need precise control over Storm if you want to pick up all the collectables. Each level of Storm in a Teacup is stocked with sugar cubes and a well-hidden sticker. If you find every sugar cube, locate the sticker, and make it through the level without dying, you’ll earn a “perfect" for that level and get to see your best completion time. Crystal/Game Center achievements keep track of your perfects, and provide some interesting challenges for completing levels in unusual ways. 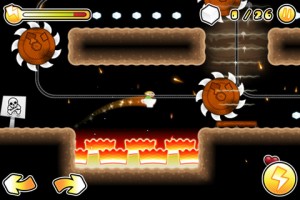 Storm in a Teacup includes 40 main levels. Playing through the whole game took me about three hours, though the fastest completion time recorded so far is 40 minutes. There are also five survival levels that can be unlocked throughout the course of the game. Between those and the challenge of perfect playthroughs, there’s lots to replay. The difficulty curve also works well. You’re faced with simple levels while you learn the controls, but by the midway point things get challenging. There were a couple frustrating moments when I really wanted to skip a level, but every level can be completed with enough care.

One technical note: Storm in a Teacup is universal, but some of our forum users have complained about low frame rate on older devices, including the original iPad. Hopefully this will be addressed in an update. Given the choice, I preferred playing the iPhone version (I find the on-screen controls uncomfortable after a while on iPad), but there are a few sections where the camera zooms out and the action is difficult to see.

I’m really happy with what Storm in a Teacup has to offer, but I feel like Cobra Mobile missed an opportunity to take it from a sweet, challenging platformer to an instant classic. All that’s missing is a good story. I couldn’t help but wonder why Cloud had created this wonderland for his brother, and why it got progressively more sadistic as the game went on. Sibling rivalry? Was I dodging spinning blades while being blown into spikes because Storm had played with Cloud’s toys or called him names? A story as cute and absurd as the game world would have made Storm in a Teacup come to life. That said, it’s a great game and an easy recommendation.