Dinosaurs still breathe. In our neck of the woods, dinosaurs are the fixture studios that once built great games and franchises. Some like Midway Games have died hard in the recent past, while others like Trilobyte Games and Cyan Worlds staunchly continue to produce. These latter two studios are rolling differently though. Instead of gripping onto the markets they’ve lost, they’re investing in the App Store.

But, in the current climate, is it even possible for these older guys to fit in, no less survive?

For Cyan Worlds specifically, it’s hard to say — at least, if Bug Chucker [$.99], it’s latest game, is considered as a valid stargazing device. And, really, why couldn’t it be used as a makeshift crystal ball? It’s certainly not a good game, so there’s little point in using it as an entertainment product.

Bug Chucker seeks to capitalize on the millions of fans of “fling” games like Angry Birds [.99 / Free] and the legions of imitators. In Bug Chucker, you control a pipe that spits bugs into space. In each level, the goal is to spit a bug directly into the mechanical maw of a metal sphere. 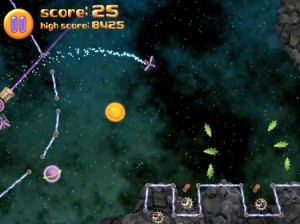 Boxes and other out-of-place blockades are deterrents, so you’ll spend most of your time clearing these obstructions with your supply of extra bugs. In addition to this, you’ll also be fiddling with a physics engine that focuses on gravity. Masses have their own fields of effect, so often the game is about shooting around objects as opposed to towards them.

It’s an alright idea as far as App Store games go, but the execution is poor and the direction overall even poorer. I think a solid touchstone for the overall woes that plague Bug Chucker is the mishmash art direction. This is a game about Earth bugs in space being fired out of a copper catapult attached to a ship with a tree the size of stars in the hull. Nothing matches, nothing feels right, and nothing jives with the other.

In a way, Bug Chucker also suffers from the same direction problems most were able to overcome with the original Myst. Experimentation was as vital in that as it is in Bug Chucker and the senselessness of testing is every bit as grating. You’re never sure if what you’re doing is right.

End of the day, I look at Bug Chucker as an interactive checklist. It’s an attempt by Cyan Worlds to do a low cost game that has all the elements of a modern Angry Birds clone. It has mascots, a bad bit of senseless narrative, a catapult, physics-based puzzles, clear goals, a lot of levels that don’t fit together, and costs next to nothing. 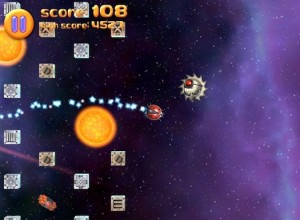 But the thing that bothers me other than the overall quality, is that Cyan Worlds is capable of better. I’m not entrenched in the camp that believes Myst and its sequels were the greatest bits of interactive fiction to ever touch a store shelf, but Bug Chucker is easily one of its worst products to date. It makes you wonder if Bug Chucker is just the end result of Cyan Worlds trying to fit in — its attempt to try and stay relevant with the new crowd of platform owners.

I’d imagine the rock bottom prices are App Store games isn’t aiding in development matters. Cyan Worlds hasn’t been in business for this long because it’s stupid with its money. It takes lost of sells of low-cost games to merely break even on development costs, so why spend significant coin on a game in the first place if it’s probably going to fail in a store packed full of other, more promising one-dollar games? That’s the tack, I think, that it’s taking with Bug Chucker — and it shows.

On another note, I’m not sure if Cyan Worlds can go backwards and  continue to leverage Myst in its traditional context. In addition to expecting games to be cheap and light, App Store consumers also want games to be fast and simple. Myst was a slow-walking, complex beast. Cyan Worlds was built to create these kinds of complex games and not the throwaway titles it’s doing now. It’ll be… interesting to see if this studio will be able to continue to compete without a total change of guard. 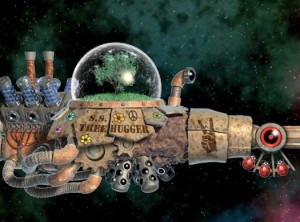 I don’t think many people are privy to what exactly Midway’s long term plans were, but it was also once an aging house like Cyan Worlds that was attempting to fit in to a market that evolved beyond its stable of IP and abilities to innovate in a flooded market. Midway’s third-person gambling game This Is Vegas was certainly no good, and  Midway’s closure proved that it couldn’t leverage its old properties in a meaningful way on consoles. Other studios, unfortunately, have leveraged its properties correctly post-bankruptcy and mass IP sell-off.

That’s not to say Cyan Worlds is digging a hole for itself, but this is an old studio with a great past to be proud of. It might be a dinosaur, but if it can somehow capture the indie game spirit that dominates the App Store, there’s a chance it’ll thrive in this new environment. I’m not sure that it will, though, if Bug Chucker is a good indication of such matters.