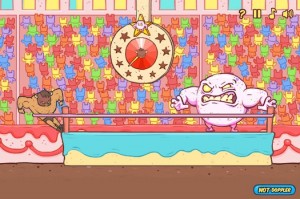 Burrito Bison, on the coolest, most vibrant, and certainly most stylized ‘fling’ games this side of Berzerk Ball [Free], is coming to iOS in the future. Developer Juicy Beast confirmed as much on its blog the other afternoon, stating that work had just begun on the first build.

If you’re unfamiliar with Burrito Bison, give it a shot over at Kongregate. The forthcoming iOS version will be a port based off this flash build, so you’ll be able to get your head around the game as a whole before you see it on touch devices.

One really cool fact mentioned in the blog post is that Juicy Beast isn’t going at this port alone — Ravenous Games, the studio behind 2D side-scroller League of Evil’s [$2.99 / Lite] superb translation to touch devices, is handling the port.

“The game controls are SUPER TIGHT, which is great because it proves that Ravenous Games really can port a game with all its details and subtleties,” Juicy Beast writes in its blog post.

The fact that Burrito Bison will be a port doesn’t disqualify the chance that we’ll get something new or amazing with BB for iOS. We’ve asked Juicy Beast for a few minutes of its time to answer our questions about the upcoming title. We’ll definitely give you an update as soon as we can.