Ever dream of managing your own baseball team? How about wishing you could run out on the field and yank that lousy pitcher off the mound yourself? Out of the Park Baseball 2011 [$4.99] has finally come to iOS devices, and satiates both those desires and more. Developed by Out of the Park Developments, iOOTP is a text-based baseball management sim originally released for the PC back in 1999. Despite shockingly low user ratings, the 2007 version of OOTP Baseball actually holds the title of 2nd highest rated PC game of all time by Metacritic. The reason? This is the baseball management franchise to own.

Sports management simulation games are all about statistics and strategy. Instead of getting in the game and taking direct control of the players, you sit on the sideline and make all the game changing decisions playing as the teams owner or manager. With a pile of statistics at your fingertips, it’s up to you to make the right calls. Because of how technical most aspects of iOOTP are, if you’re not an absolute baseball fanatic it’s probably safe to steer clear. However, for those of you that pour over every line of your fantasy lineups season after season, dying to make those crucial trades, and can’t get enough of running their own franchise– This game was made for you.

iOOTP gives you complete control of your entire major league team. With an easy to use overview from changing your lineups and rotations, to the leagues player trades, the amount of information available to you is mind-blowing. Building up your dream roster by trading players and offering up contracts to new players is where the fun really comes in. While all this may be a little overwhelming for people new to the genre, the games menus are laid out well and makes navigating between your rosters, trade info and player stats a breeze. 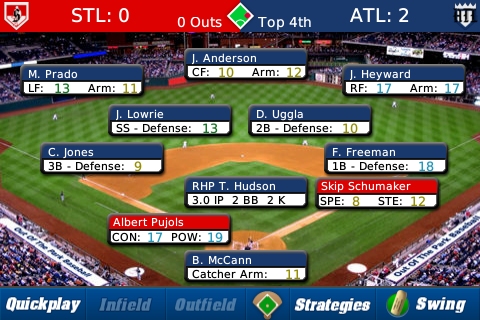 Two options are available for the actual games of baseball. First off, you can have iOOTP simulate absolutely everything, or you can take control of the game as the coach. Playing this way grants full control of players on the field, from who steals home, to how far your outfielders are. Every crucial decision in game lies with you.

After each pitch the game spits out a line by line commentary of what’s happening on the field, and there’s also a graphic of the baseball diamond showing you what players are where. Even though it’s not much to look at in the visuals department, and there’s absolutely no audio to be heard, it’s still hard not to get drawn into a 9-inning match up with all the different options and strategies at your fingertips.

Full seasons can be played with incredible levels of depth, and even a hall of fame for your best players. From the various injury reports, player stats, and team stats, there’s a lot to dig through, and a clever menu system makes navigating through all this data very easy. Seasoned players of the OOTP series will feel right at home with the new touch interface, and nothing is too complicated for new players (assuming you already know all the detailed ins and outs of the game of baseball).

With a great menu system driving the entire game, excellent AI, and the ability to micro-manage almost everything you could dream of in a sports game, it’s hard to want anything else of a mobile baseball management sim.