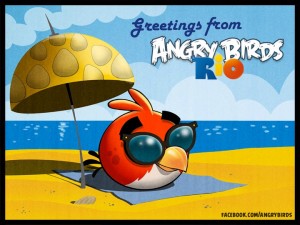 Normally movie tie-in games aren’t very good, but we were pleasantly surprised with Angry Birds Rio in our review, even awarding the game 5 stars. More than just a Rio re-skin of the original game, it actually contained a few new elements and improvements that made it almost feel like a full-fledged sequel.

In following with Rovio’s practice of adding plenty of new levels to the original Angry Birds and Angry Birds Seasons, they have released a trailer for the first update that is set to hit for Angry Birds Rio, subtitled “Beach Volleyball":

Rovio has stated on their Facebook page that this new update is set to hit sometime this week. If you’ve been enjoying Angry Birds Rio as much as we have, then keep your eyes peeled for an App Store update badge these next few days to check out the new Beach Volleyball levels.