Piclings [99¢] from Pan Vision Games is one of the most interesting uses of augmented reality in gaming that I’ve seen. It’s a simple platforming game that can take any picture and turn it into a playable level filled with coins, items, and enemies. The tech works surprisingly well, and it’s undeniably fun to think of new and silly pictures to create levels from. Unfortunately, the underlying gameplay mechanics aren’t the greatest, though they’re serviceable. Despite this, Piclings is still a unique enough experience that’s worth checking out.

The game includes 7 levels to play including a tutorial which walks you through the basic controls. A touch anywhere directional stick moves you character left and right, and you can float like a helicopter in the air for a limited time by pushing up. The floating mechanic is pretty awkward to use, and I would have much preferred the ability to just do a standard jump. Tapping anywhere on the screen will drop the Picling through the surface he’s currently standing on and down to the next. 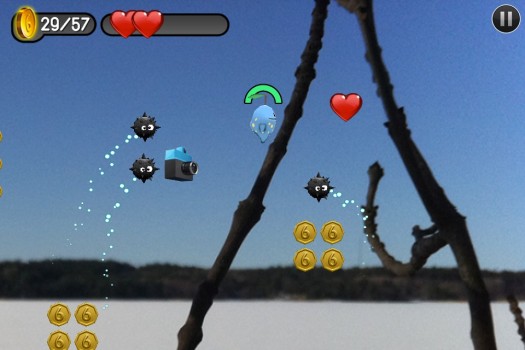 There are a couple of enemy types to worry about too, like one that will slowly follow you around and one that constantly wanders the surfaces in each level. The only way to kill these guys is by luring the follower into another enemy, killing them both, or by grabbing an invincibility butterfly that lets you kill every enemy that you touch. Trying to make enemies collide to get rid of them is another awkward part of the gameplay, and again I’d prefer if it was just a standard “jump on their head to kill them” method.

In addition to the 7 included levels, you can also import any picture from your device or use a picture taken directly from the camera to create a new level. Piclings will intelligently determine what parts of the picture act as walkable surfaces, and for the most part it works really well. You can also go into any created level and edit your own surfaces in or out in order to get the level just how you want it. Enemies, coins, and special items are also automatically placed in your created level.

The level creation is where Piclings really earns its stripes. I’ve already spent an embarrassing amount of time just trying out different photos to make levels with, and I’m impressed every single time by how well it works. It’s not perfect, but it’s pretty close, and the ability to edit custom levels means you can spend the time to perfect it if you wish. You can also share your created levels, though this is only by way of emailing your photo to someone so they can save it to their device and use it in their copy of the game.

Taking Piclings as strictly a platforming game, it’s a fairly weak offering. The control mechanics are odd and probably would have worked better if modeled after a more traditional platforming game which has been done well many times on iOS. There also isn’t much to do in the game, as there’s no real story or campaign progression and the only real goals are earning Game Center achievements and uploading scores for each level to the leaderboards. Despite this, Piclings is still a lot of fun based solely on the ability to create your own levels. This novelty alone means I’ll be playing the game for a good long while until I run out of funny ideas for levels.

If that sort of thing sounds interesting to you, then Piclings is easily worth the purchase, and players in our forums seem to be enjoying it as well. But if you’re looking for the next great iOS platformer, then you’ll want to look elsewhere.