When released back in 2009, the original Zenonia was one of the first full fledged action RPG’s on the App Store. Gamevil received heaps of praise for both the first and second installment in the series, and Zenonia 3: The Midgard Story [$4.99] seems to live up to the ever-increasing quality iOS gamers come to expect from their sequels.

The first thing I have to say about Gamevil is that their art style is fantastic, they really are masters of sprite-based animation and this game looks amazing. They’ve managed to provide a great retro pixelized feel while still taking full advantage of the crispness offered by the Retina Display of recent iOS devices. Zenonia 2 looked great, and 3 somehow looks even better. 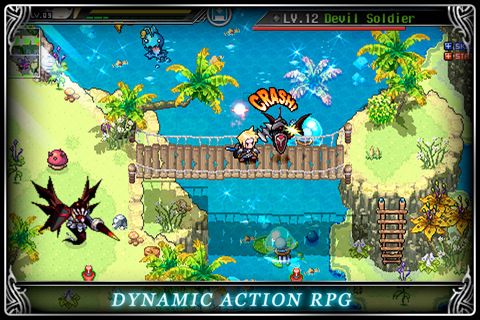 The story follows the typical cliche RPG plotline. You play as Chael who has mysteriously found himself smack dab in the middle of an epic battle between good and evil, and while the story doesn’t feel original by any stretch of the imagination, it’s been localized extremely well and is a fairly enjoyable one to play through. Interestingly enough, not once did I feel like I was playing a game that wasn’t intended for an American audience which has been a bit of an issue in previous Zenonia titles. Though some of the dialogue can be a bit tedious, if you pay attention there’s actually some pretty funny lines throughout the game.

When you start the game, you’ve given the choice of four different classes. There are two melee fighters: A heavy hitting Sword Night, or the more agile Shadow Hunter. If you prefer a ranged combat class you can choose between the weapons-focused Mechanic Launcher, or the magic-weilding Nature Shaman (which is my personal favorite). Each class has their own unique abilities and equipment but overall won’t change how the game plays in any substantial way, but instead, which abilities you mash as you grind. 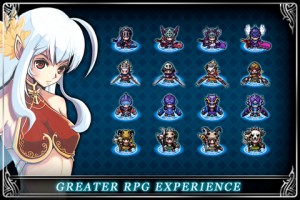 If you’ve never played a Korean RPG before, I’ll go ahead and warn you now. Be prepared to grind. This game requires a lot of button smashing throughout the entirety, and for some people this might get fairly repetitive. Thankfully, there are quite a few boss battles which are a lot of fun that serve to break up the monotony. That is, if your character is leveled up properly. How do you level up? Grinding mostly, usually guided by quests involving killing X number of monsters or picking up Y number of dropped items by killing potentially even more monsters. There are a good number of side quests too, so keep your eye out for those.

Aside from the games graphics being improved from the earlier titles, not too much has changed in the core gameplay aside from the removal of the annoying hunger and weight systems from previous games. Playing Zenonia 3 basically amounts to entering a zone, killing monsters, earning experience, and upgrading your character. Wash, rinse, repeat. For a lot of gamers this is exactly what they’re looking for in an action RPG and if this sounds like your style you won’t be disappointed at all, I know i wasn’t.

The amount of leveling and customization that can be done with your character is insane with tons of equipment, crafting, and upgrades available. It seems like you’re almost always upgrading something, which does a great job of keeping you playing as yet another upgrade always seems right around the corner.

The one major issue I have with Zenonia 3 is that even though boss battles are totally welcome, they can get extremely difficult, especially the final boss. If you’re not leveled up properly you will have to spend “zen points" when you die or risk taking penalties that will last the remainder of the game. 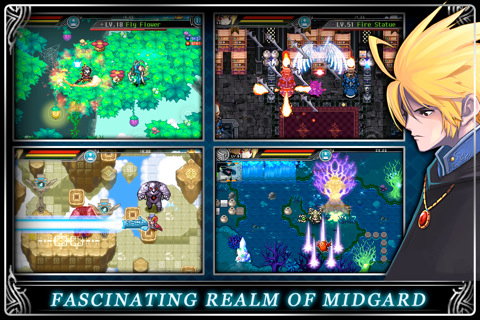 Zenonia 3 comes with 5000 zen points and once they’re gone, they’re gone. Be warned that using up all your zen points will leave you with two options, either buy more via in-app purchase or take the penalties like less experience, gold, and equipment durability. You can earn zen points by competing in the PvP modes or spamming social services, but if your focus is on single player, and you don’t want to take death penalties, you’ll likely be forced into buying them.

Luckily, one of the new additions to Zenonia 3 will help level your character without the risk of penalties through the use of what’s called “execution rooms". You move from room to room very quickly, killing tons of monsters, and earning loads of experience. They’ve even implemented a co-op feature to allow you to grind through execution rooms with a friend online. This is really the best way to level up your character, as you both get loads of experience quickly and aren’t forced into choosing between spending zen points or taking penalties when you die.

Another nice addition in Zenonia 3 is a PvP mode, where you can pit your character against other players online to earn experience and gold. Similar to Baseball Superstars’ online mode, these battles don’t take place in real time, and instead you’re mostly just fighting a battle between your two characters’ stats and equipment. Still, it’s a lot of fun.

Zenonia 3 is a quintessential Korean action RPG. It has a lot of grinding, mixed with a decent storyline, and great sprite-based graphics. Kinks from previous games in the series have been ironed out (like the previously mentioned hunger and weight systems) and the new menus, customizable UI’s, and character skill trees are welcome improvements. If you’re nervous about getting involved in the Zenonia series, Zenonia 2 Lite [Free] is a great no-risk way to see if you like these kind of games or not. If grinding isn’t an issue, and you’re OK with the zany IAP-powered zen points system, you’ll have a ton of fun with Zenonia 3.