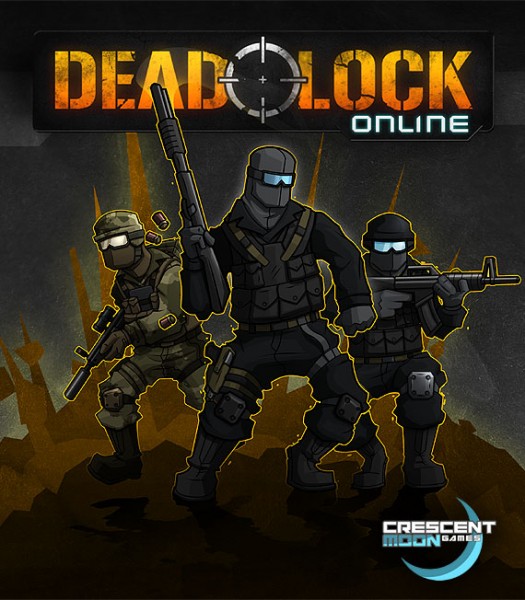 It seems it’s never a dull moment for Crescent Moon Games, who after their successful release of Gears [99¢] last week are already back with a new game in the works. It’s called Deadlock and it’s an ambitious dual-stick shooter that will feature cooperative and competitive online multiplayer for up to 8 players.

I’ve been playing a preview build of Deadlock for the past several weeks and have to say I’m really impressed so far. The Game Center connection used for matches is solid even in this early state, and the core dual-stick gameplay is perfectly suited for competitive matches. Deadlock will initially ship with 5 levels and 3 game modes including Deathmatch, Team Deathmatch, and Capture & Hold.

One of the big features of Deadlock is the robust load-out system that has a few similarities to recent Call of Duty games. There are more than 30 different weapons in the game, including assault rifles, sub-machine guns, pistols, grenades, and more. These weapons can then be augmented with attachments that offer better aiming or additional damage, and your player can equip various types of armors that affect your stats as well. Most of these items will be unlocked as you earn the 30 available ranks in the game through playing.

Here are a couple of very early screenshots of the parking lot level in Deadlock: 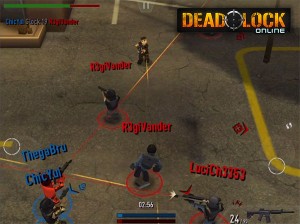 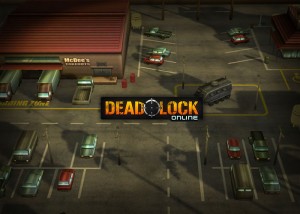 While other dual-stick shooters have dabbled in various types of multiplayer before, we’ve all been waiting for that one killer app that feels built from the ground up for online play, and Deadlock aims to be that game. All I can say is it’s off to a great start based on my time with early versions of the game. Crescent Moon is aiming for an early June release for the game, and we’ll have much more information on Deadlock later this week including a video of the game in action. There is currently a discussion thread for the game in our forums as well.